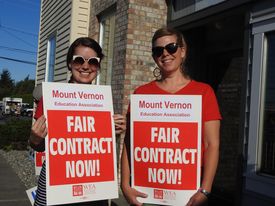 Negotiating professional pay at the local level is at the core of our union.

With the 2018 legislative session set to start Jan. 8, now is a good time for an update on the pending changes to educator salaries.

When Legislators approved a new K-12 school funding plan earlier this year, they voted to replace the current longstanding teacher pay system with a brand-new approach. The plan increases state funding for K-12 salaries by billions of dollars over the next several years, which means educators will have the opportunity to negotiate substantial pay raises over time.

In 2019, certificated educators in every school district will have to negotiate new local salary schedules to determine how much they are paid. That’s the role of WEA’s local unions. Collectively bargaining salary increases locally is at the core of what we do as a union.

Instead of allocating salary funding based on the years of experience and the education level of teachers in a particular district, the new approach provides a flat statewide salary allocation per teacher to every district. The plan also allocates additional salary funding in school districts based on housing costs. While it’s a dramatically different approach from the system that has been in place for 30 years, it’s also a huge opportunity for educators to develop pay schedules that meet their local needs – including competitive pay increases.

Most WEA members are familiar with a pay system that recognizes their experience and education level, and how to address those issues will be negotiated by each local union.

The Legislature directed the Office of Superintendent of Public Instruction to create examples of what the new salary schedule might look like. OSPI created a committee that debated the issue, but the group hasn’t reached agreement on recommended salary schedules. (WEA appointed two representatives on the committee, and there are members representing counselors, nurses, and librarians, as well as administrators.)

How school employees are paid is a local decision determined through collective bargaining, and OSPI has no authority to force districts to adopt a particular salary schedule. One reason the OSPI group was unable to reach agreement was because school districts have different needs and challenges, making it impossible to develop a one-size-fits-all salary schedule that would work in every district. 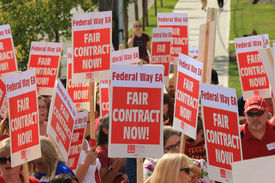 Educators will have the opportunity to negotiate substantial pay increases over the next four years because of WEA's advocacy.

Ultimately, union members in each local will have the opportunity to be involved in determining their salary priorities and goals and to vote on their new salary schedules.

The pay system for education support professionals isn’t changing, although the state will be dramatically increasing funding for classified salaries over the next four years, which means ESP members also have the opportunity to negotiate significant pay raises.

In November, the Washington Supreme Court ruled the Legislature needs to increase K-12 funding for educator salaries by another $1 billion by Sept. 1, 2018, on top of the increases already approved this year. One of WEA’s priorities this session is to improve K-12 compensation funding for the 2018-19 and we will be advocating for the Legislature to include the $1 billion in its supplemental budget. WEA members urge Gov. Inslee, just like last year, to include this funding in his budget proposal later this month.