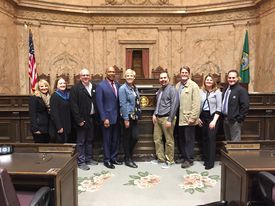 WEA members from Marysville and Everett met with legislators in Olympia Thursday, including Rep. John Lovick, a Democrat.

Now there are four K-12 school funding plans in Olympia.

On Feb. 22 House Democrats approved a plan for funding public schools that also includes signficant base pay increases. It, too, protects the freedom to negotiate salaries with local school boards, as does a similar proposal from Senate Democrats, who are in the minority.

These Democratic plans are much better than the K-12 funding bill approved by Senate Republicans, which WEA strongly opposes. Their plan is packed with punitive and reckless policies, including attacks on teacher quality, due process and collective bargaining. It also increases class sizes and eliminates voter-approved cost-of-living adjustments for school employees, and it potentially paves the way for Betsy DeVos-style school vouchers.

Sen. Mark Mullet also has introduced a plan. A new substitute for his bill just appeared Thursday, and a hearing will be held on Monday in the Senate Ways and Means Committee. WEA lobbyists are currently reviewing the details of Senator Mullet’s plan in preparation for Monday’s hearing.

All of these plans are in response to the state Supreme Court’s 2012 McCleary decision, which found the state is failing to amply fund basic education as required by the Washington Constitution.

During budget debate on the House floor, Republican legislators repeatedly argued for changing the school levy system. The Senate Republican plan, for example, severely restricts how much levy funding voters can approve – limiting their ability to meet their students’ unique local needs

Yet the Supreme Court itself has said that changing the levy system or restricting levies is not required to comply with McCleary.

“We offer no opinion on whether full state funding of basic education...must be accompanied by levy reform…,” the Court wrote.

Ultimately, the Republican Senate and the Democratic House have to agree on a K-12 funding plan and overall state budget. The regular legislative session ends April 23. While special sessions are likely, there is no reason for legislators to delay – as the Supreme Court said in its order, “the State has had ample time to deal with this matter, not just since McCleary, but well before."