This Week In Olympia

Two things you can do right now to support public education funding:

Attend an education funding meeting with legislators in your community this March. 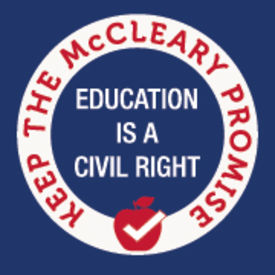 Next Thursday is the halfway point in the 105-day regular session, which is scheduled to end April 23.

Friday, Feb. 24, is the deadline for fiscal bills to pass out of their original committees, although bills related to the state budget can resurface at any time. Most of next week, the House and the Senate will be engaged in floor action, which means debating and voting on legislation. The House is likely to work this weekend, but the Republican-controlled Senate reportedly is not working on weekends.

With the passage of House Bill 1843 this week, both the House and the Senate have now approved K-12 funding plans. WEA opposes the Senate GOP plan. We strongly support Gov. Inslee’s $4 billion K-12 funding plan, and we are encouraging legislators to follow the Governor’s lead.

Ultimately, the Republican Senate and the Democratic House have to agree on a K-12 funding plan and overall state budget. While special sessions are likely, there is no reason for legislators to delay – as the Supreme Court said in its order, “the State has had ample time to deal with this matter, not just since McCleary, but well before."

Sen. Mark Mullet has introduced another education funding bill, Senate Bill 5825, will be heard Monday in the Senate Ways and Means Committee. WEA opposes the bill because it doesn't increase school funding enough to comply with McCleary..

Good News on Testing and Bargaining

A Republican-sponsored bill removing testing as a high school graduation requirement, Substitute House Bill 1046, passed 29-4 out of the House Appropriations Committee and is expected to go to a vote of the full House.

House Bill 1237 extends collective bargaining rights for salaries to community and technical college faculty. It passed out of the House Appropriations Committee 22-11 and is expected to go to a vote of the full House.

The Senate budget committee approved a bill (Senate Bill 5726) this week that would eliminate the current health care system for educators and force all K-12 employees into the existing health care plan for state employees, a move WEA opposes.

House Bill 1488 allows undocumented residents to qualify for state financial aid for college. It passed out House Appropriations Friday and is expected to go to a vote in the full House.

Substitute House Bill 1115 funds professional development for paraprofessionals and updates the para AA degree. It passed out of the House Appropriations Committee this week and is expected to go to a vote in the full House. WEA supports.

House Bill 1341 adds a third option for teacher certification. In addition to ProTeach and National Board Certification, teachers could qualify for professional certification by earning 75 professional development credits. (clock hours). It passed out of House Appropriations Friday and is expected to go to a vote in the full House. WEA supports.

House Bill 1319 allows teachers who earn a three or four on their focused evaluation to continue with focused evaluations for six years before receiving a comprehensive summative evaluation (currently required every four years). Waiting for a vote by the whole House. WEA supports.

Senate Bill 5702, which modernizes school construction formulas, passed out of the Senate Ways and Means Committee and could go to a vote of the full Senate. WEA supports this bill.

Substitute House Bill 1168 provides funding to convert some part-time community and technical college faculty positions to full-time tenure-track positions. Unfortunately, this bill was amended to dramatically reduce the number of positions that would be converted. It passed out of House Appropriations Friday and could go to a vote in the full House.

House Bill 1374 allows certificated education staff associates to claim prior non-school experience for placement on the salary schedule. WEA supports this bill, but it has not passed out of its original committee.