“All of the work that WEA put in last year is paying off for union members and for the students we serve!” said James Peyton, president of the Highline College Education Association.

Victory! After more than a decade of hard work by WEA members and our allies, the 2018 Legislature approved equal bargaining rights for community and technical college faculty.

With passage of EHB 1237, Washington's community and technical college faculty have won the freedom to negotiate salary increases that exceed what the state provides.

That means that along with the state-funded 6 percent COLA for the 2017-1919 biennium, faculty unions can now negotiate at each college for salary increases above the COLA. WEA represents faculty at 13 of our state's community and technical colleges.

Until now, faculty have had to wait for state funding for any salary increases, including step movement on the salary schedule. Since 2008, two-year colleges have not received any state funding for salary increments or pay equity for part-time faculty. For six years they did not even receive a  COLA. As a result, our college faculty were frozen on their schedules and no movement could be made for our part-time faculty whose salaries are substandard.

Those days are over. 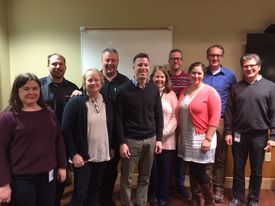 Republican Sen. Brad Hawkins (center, in sweater) was a key vote in the passage of equal bargaining rights for college faculty.

After 10 years of fighting to pass this legislation, WEA, working with AFT Washington and other public-sector union supporters, finally passed legislation granting faculty equal bargaining rights.  It was largely because of the one-vote Democratic majority in the Senate that finally helped push the bill over the finish line.

With passage of this law, it will become more important than ever for college faculty, part- and full-time, to join and become active members of their local unions.

Equal bargaining rights for faculty were at the top of WEA's Unity Agenda for the 2018 legislative session.

"It's a union victory at a time we're under attack. It shows why we need to be part of WEA - we have a voice. If we didn't stand together as WEA members this would not have passed," said Carla Naccarato-Sinclair, president of WEA Association of Higher Education (AHE).