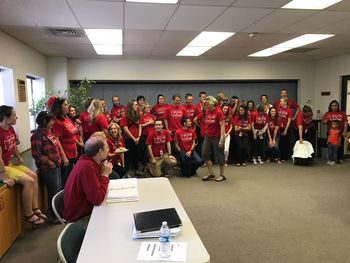 We are excited to announce more great contract wins. Bridgeport EA, along the banks of the Columbia River in the central part of our state secured a 21.1% increase in pay as compred to last year. In Southwest Washington, along Highway 12, Mossyrock EA, members have bargained a 15.3% increase in pay, though some teachers will see even more than that.

In the same week that the state Supreme Court officially closed the McCleary case, news came from a couple locals of major gains at the bargaining table.

The court found that the legislature had indeed met its direction to provide additional $1 billion in funding for educator salaries effective the 2018-19 school year.

And, as if to put an exclamation point on that, Ocean Beach and Cascade EAs announced new agreements with significant increases in educator salaries. Ocean Beach, nestled between the Pacific Ocean and North Bay, achieved a 21.1% pay boost and Cascade, in Leavenworth, secured a 15.9% raise for its members.

These increases are proof that the funds are there, and contrary to what many Superintendents are saying, they are not limited to a COLA-style cap on salaries. “The district realized and followed through with the legislature’s recommendations: this is money for salaries,” noted Doug Pellerin, OBEA’s president-elect.

After so many years of stagnant wages, Miki Frace says her new contract makes her and her colleagues “feel respected, and not just in my district, but in my state.”

Further east, in the mountain town of Leavenworth, Cascade EA has also negotiated a strong new contract that will help attract and keep great educators on the job, with an increase just shy of 16% compared to last year.

Local president Vicki Harrod noted, “Our members had high expectations going into our bargain this year, and they were behind the team.”  Cascade teachers wore their red shirts and showed up at every bargaining session to rally in support of their local. “The district saw that our members care and that we were united. That made a difference.”

Congratulations to Cascade and Ocean Beach. We expect other good bargains will be announced soon and will continue to report them here.  Stay tuned.

A note about our numbers: sometimes, the percent increase WEA reports is not the same as what the local reports. There are so many contract variations, that it can be difficult to compare them. WEA’s reporting attempts to provide a consistent, apples-to-apples accounting of contract gains.