With an influx of school funding thanks to the McCleary victory, WEA members across the state continue to negotiate substantial pay raises.

This week Edmonds Education Association reached a tentative agreement that calls for raises between 13-19 percent, a beginning salary of $62,688  and a top salary of $114,000. Bellevue educators are getting 17 percent on average. In Bainbridge Island, it’s a 21 percent raise. Mossyrock: 26 percent. Manson Education Association in North Central Washington recently negotiated a 15.3 percent pay raise on average.

“We are thrilled with our settlement and the progress it makes at all levels of the salary schedule!” said Andi Nofziger-Meadows, EEA president.

Here’s the map that shows the best contract settlements so far. Administrators in those districts realize that if their districts don’t provide competitive, professional salaries, they’re going to lose quality teachers and support staff to higher-paying districts and professions. Attracting and keeping caring, qualified educators for our students is crucial in every district.

“If you look at the surrounding districts and what they got, if we're going to keep educators here and provide the best educators for our students, why wouldn't we get the same amount or close to the same amount?” Seattle Education Association President Phyllis Campano told KIRO TV this week.

In some districts, administrators and school boards are making excuses instead of negotiating competitive pay for their employees. 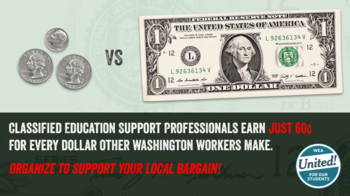 Administrators in the Evergreen and Camas school districts near Vancouver, for example, falsely claim there’s a cap on salaries. Supt. Of Public Instruction Chris Reykdal knocked down that myth in a recent memo, and the state Public Employment Relations Commission this week rejected a school district request to weigh in on the issue.

Administrators in other areas claim their districts will have less money in the future and can’t afford to provide pay raises. That, too, is false. Because of the Supreme Court’s McCleary decision, the Legislature approved billions of dollars in increased state funding for public education, including $2 billion for educator salaries in the 2018-19 year (which starts in less than a month). While funding varies by district, nearly all of the state’s 295 school districts will receive more funding overall (state, local and federal funding combined).

The new state funding is for both certificated and classified salaries – education support professionals deserve competitive, professional pay just like teachers do.

“The state has provided the funding, now it is up to the district to meet the McCleary promise by paying the kind of professional wages our members deserve and which will keep them working in Aberdeen,” Aberdeen Education Association President Michelle Reed told The Daily World.

WEA members in many locals have vowed to fight for the pay they deserve. This week members of the Centralia Education Association voted to authorize their leaders to call a strike if the Centralia School Board and administration fail to offer a fair contract settlement by midnight Aug. 31.

Dozens of other local unions have general membership meetings scheduled later this month, where they’ll either vote on a tentative contract agreement or decide what action to take. More than 220 WEA locals are in contract negotiations over salaries.