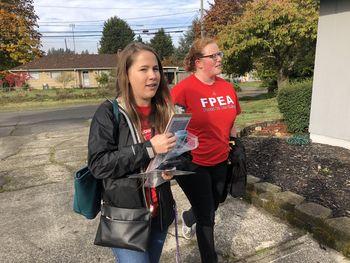 The pro-union, pro-student majority in the Washington Legislature will grow when lawmakers convene Jan. 14.

Based on initial results that could change, a majority of the pro-student, pro-union candidates recommended by WEA members won in Tuesday’s general election.

Here is a list of the recommended candidates who currently are winning their elections.

"WEA members helped elect pro-education candidates across the state,” said Kim Mead, WEA president. “Now we look forward to working with the Legislature in the upcoming legislative session to make sure our students have the resources and support they need to be successful."

Later in November, WEA will release its 2019 legislative priorities, which will include school safety and funding issues.

Posted in: Elections | Legislative Issues
Back to Blog