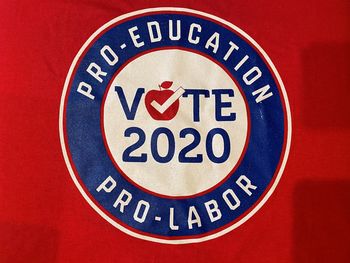 WEA endorses pro-education, pro-labor candidates who can make advances for students, educators and public schools. We have also been proud to endorse a slate of Black, Indigenous and People of Color (BIPOC) candidates to improve representation in the statehouse this year. The more our elected officials look like all of us, the better the decisions that come out of Olympia.

WEA President Larry Delaney shared his thoughts about some of the races:

“Educators know what a considerable impact elected officials can have on the quality of education we are able to provide. That’s why we’re thrilled to re-elect Gov. Jay Inslee. He backs public education and stands up for our students.  We’re looking forward to working with him for the next four years.

“Never in Washington’s history have we had the opportunity to send such a diverse group of candidates to Olympia. WEA is proud to have supported BIPOC candidates and help them to victory.  Representation matters and we’re thrilled to have a legislature in Olympia that better represents the people of Washington.”

“Educators know how critical it is to have leaders in Olympia who support public education and will work to get our students what they need. WEA was proud to support Superintendent Chris Reykdal, a strong leader with integrity and experience. We congratulate him on his reelection and look forward to working with him to improve racial equity, close opportunity gaps, and invest in our great public schools.

“Tonight we took one step forward in addressing systemic racism by electing more Black, Indigenous, and people of color  candidates who more completely represent the diversity of our community.  WEA put our strength behind these candidates because we know how critical it is for all of our voices to be heard.  We congratulate all of our winning candidates and will support their success in Olympia.”

As ballot counting has continued, we have updates:

In key races where WEA focused, four out of seven of our candidates are winning. This is the slate of BIPOC candidates WEA endorsed to improve representation in the legislature.

In the remaining districts, here are results.