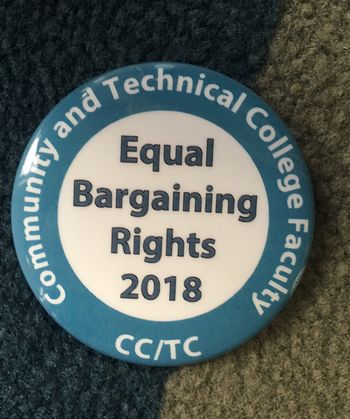 On March 5, the state House voted 57-41 to concur with our bargaining bill, EHB 1237, with acceptable amendments from the Senate that had passed two weeks earlier. The bill had bipartisan support in both chambers. Here is the House vote tally.

Now the bill goes to Gov. Jay Inslee, who is expected to sign it. At a time when some groups and politicians are trying to take away our freedom to join together and negotiate, the bill's passage is a major victory. WEA represents faculty at 13 community and technical colleges.

The legislation grants college faculty the freedom to negotiate locally funded pay raises - a freedom that all other public employee unions already have in Washington. Equal bargaining rights for faculty were at the top of WEA's Unity Agenda policy priorities for the 2018 legislative session and have been a WEA goal for over a decade.

"It's a union victory at a time we're under attack. It shows why we need to be part of WEA - we have a voice. If we didn't stand together as WEA members this would not have passed," said Carla Naccarato-Sinclair, president of WEA Association of Higher Education (AHE).

The freedom to negotiate better salaries with local funding will provide stability and allow colleges to attract and keep quality faculty for their students.

Yet, some college administrators continued to lobby against the legislation up until this week's House vote. Some of them put more effort into defeating equal bargaining rights than they did lobbying for increased funding for higher education, noted Wendy Rader-Konofalski, WEA lobbyist.

Some of WEA's classified members also scored a victory this week.

On Tuesday, the Senate concurred with a House bill that gives paraeducators one more year to meet their minimum employment standards and eases the onset of new professional development requirements in the 2019-20 school year. Now it, too, goes to Gov. Inslee for his signature. This is an important bill that affects many of WEA's education support professionals.

"Fabulous!" said Cathy Smith, an Olympia paraeducator who testified in support of the bill.