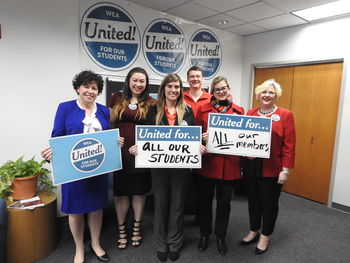 This week the state House passed legislation that removes high school tests as a graduation requirement.

House Bill 1089 passed 84 to 13 with support from Republicans and Democrats. Now it goes to the state Senate. It’s what supporters call a “clean de-link,” meaning students would still take federally mandated tests, but passing those tests would no longer be required for high school graduation. Currently, students must pass the math and English/language arts tests to graduate.

WEA member Andrea Hicklin teaches math at Timberline High School in the North Thurston School District. She testified twice in Olympia, explaining why using tests as a graduation requirement is a flawed policy that hurts students instead of helping them.

“If a student’s grades and coursework and credits all say, ‘This person knows what they need to know except they don’t pass one test,’ then the test is an outlier,” Hicklin explained to legislators. “In statistics, you don’t ignore the bulk of the data because it doesn’t match the outlier. You ignore the outlier because it doesn’t match the rest of the data. So a single score should not be what stops a student from graduating.”

Other bills would also de-link tests from graduation, including Senate Bill 5548 and HB 1599, but both bills add or change other graduation requirements.

On March 6, the House passed an important bill that could help increase the number of counselors 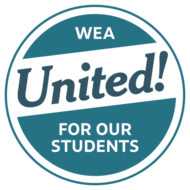 at community and technical colleges – another WEA priority this year, HB 1355 passed on a bipartisan vote of 72-24. WEA member Rep. Lillian Ortiz-Self is the prime sponsor. She is a counselor in the Everett School District. WEA member and Columbia Basin faculty member Rep. Matt Boehnke also gave a great floor speech in support of the bill, which creates a task force to review counseling ratios and make recommendations.

March 13 is the deadline for bills to pass out of their original chamber (the Senate or the House). Budget-related bills can remain alive until the end of session, which is April 28.

This week, groups of WEA members visited their legislators in the capital to discuss testing, school safety, restoring levy flexibility and other WEA priorities.

“We hear all our legislators’ names and read them in the newsletters, but it was cool to talk to them,” said Katelyn Wiens, who teaches in Granite Falls. “We can influence them from the teacher perspective. I told my legislators I need more support for my students.”

WEA and Evergreen Education Association member Monica Stonier is a state representative from Vancouver, and she recently shared her advice for other educators who want to influence legislation. Watch her video: