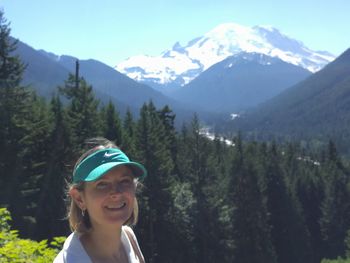 Educators’ voices are critical in this election, yet with COVID-19, our advocacy looks different than usual.  This summer we were unable to doorbell so we began forming Digital Action Teams and using OutVote, our digital advocacy app.  It made a big difference in the primary, where WEA members reached out to thousands of voters through our social media and texting.  Karen Kline, a librarian in Sammamish at Beaver Lake Middle School, was one of the members active in OutVote.  We reached out to her to learn more.

What motivated you to join the Digital Action Team?

I think that it’s my moral obligation to participate and to represent the student view, since they don’t get to vote.  I just see apathy among a lot of people.  I know they’re busy so someone needs to advocate for students.

Is there a candidate or issue on the ballot right now that’s motivating you?

I’ve been watching Ingrid’s campaign in the 5th legislative district and I’m so very glad that I tweeted out about her because it looks like that race is going to come down to a few hundred votes. I think that having her repres 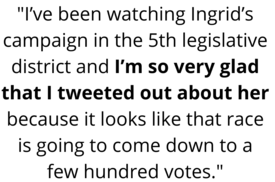 ent the district where I work will make a big difference.  The fact that she’s a nurse and we’re facing so many issues of health in this pandemic — we need more people like her representing us.

Have you volunteered for elections in the past?

I have participated from time to time.  I’ve been a teacher since 1988 so I remember collecting signatures to reduce class size and delivering those signatures to Olympia I’m been a Delegate to Rep Assembly before, both for WEA and NEA. I’m more likely to be an online participant for politics.  I had a friend who ran for legislature and I doorbelled for him, but I’m not much of a doorbeller.

I really like the online format. I haven’t been real involved in election advocacy in the past because I don’t like being out there doorbelling. I know we have to put ourselves out there if we’re going to campaign. With it being online it felt a little more safe.

Did anything happen on OutVote that surprised you?

Through my OutVote posts I reconnected with a former colleague who I hadn’t talked to in a long time.  The response has been overwhelmingly positive.

Why are teachers’ voices important?

We work with hundreds of students every year and we know their education is political.  We’re funded politically and decisions about our curriculum are made by legislators.  Teachers have to be out there getting involved and making a difference. Using OutVote helped me do that!

5 reasons why educators back Chris Reykdal

Get to know T'wina Nobles