The money for salaries is coming -- we have to go and get it! 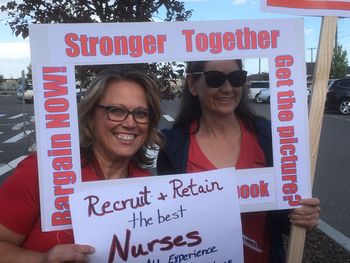 Across Washington, local unions and school district administrators are negotiating double-digit pay raises for teachers and support professionals – as high as 21 percent in a couple of districts so far.

More than 250 contracts are either fully or partially open, and similar settlements are possible throughout the summer. As part of the McCleary school funding court case, the Legislature approved $2 billion in additional funding for educator salaries in 2018-19 and increased the mandatory minimum salary for teachers.

Throughout the McCleary funding battle, we fought to retain our freedom to negotiate fair pay at the local level with our school districts. After all, the most important thing our local union does is negotiate for better wages and benefits, and make sure our contract is enforced. Decisions about educator pay should be made locally.

Yet even with our success, administrators and school boards in a small number of districts are making excuses instead of negotiating the pay raises needed to attract and keep qualified, caring educators for their students.

Mukilteo is one of those districts, and teachers are fighting back. On June 11, they voted no confidence in their superintendent and authorized their bargaining team to call a strike if there’s no tentative agreement by Aug. 15

“The school board and superintendent just want to hold on to the dough,” says Melissa Dahl, a seventh-grade teacher. “The school board sees the chance to make their reserves even bigger. It’s pretty unbelievable.”

The situation is similar in the Evergreen School District in Vancouver.

When Evergreen Education Association bargainers met with district administrators June 11, they expected a good faith proposal based on local needs, the amount of money available for raises and the Legislature’s intent. Instead, Evergreen administrators offered a minimal 1.9 percent.

On June 13, the EEA Representative Council – more than 120 teachers – voted to have a strike vote at their August general membership meeting if their district hasn’t negotiated a fair contract settlement by then.

“The money for salaries is coming -- we have to go and get it,” Padilla says. “If we don't bargain the money now, the district will not offer it to us later. Now is our opportunity. All WEA members need to become involved in their bargain. “