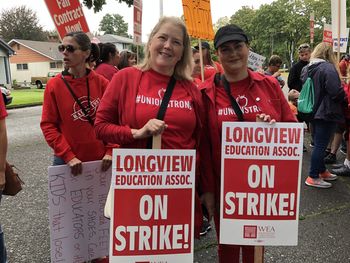 Longview teachers are on strike over fair pay. More strikes are expected.

In Lake Stevens, teachers reached an agreement that includes a beginning salary of $58,000 and a maximum salary of $112,984 for the upcoming school year.

“It really has impacted the financial future of my family,” said Shoreline teacher Peter Reni. “This is going to attract a lot of really smart, dedicated and invested young people to this profession.”

Meanwhile, administrators in some other school districts still refuse to negotiate competitive pay with their employees. Teachers in Longview remain on strike, and teachers in Evergreen and Washougal will be on strike beginning Tuesday, Aug. 28. Several other WEA locals have set strike deadlines for this week, and more than 180 local unions continue contract negotiations (see list below).

Teachers in Camas and Sultan both voted Monday night to authorize strikes.

In every district, WEA members’ goal is a fair contract they can ratify with pride – going on strike is not the goal, but it’s a step many are willing to take if necessary. Because of the McCleary court case, the state increased funding for K-12 schools by billions of dollars, including $2 billion specifically for educator salaries in 2018-19. School districts have the money!

Professional, competitive pay is needed to attract and keep caring, qualified teachers and education support professionals for our students.

Here is the list of WEA certificated and classified support staff unions that were still in negotiations as of  8 a.m. Sept. 5 It is possible that there are additional units that have settled their contract but not reported in yet. Check the map for strikes.