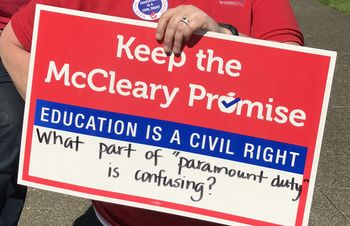 After midnight in the early morning hours of April 3, the Senate Ways and Means committee passed a new levy bill with amendments that would restrict collective bargaining rights for certificated staff and implement a salary cut by 2022.  If this bill, SB 5313, were to go into effect, it would reduce teacher average salaries by over $5,000 and limit teachers’ ability to negotiate salary increases for increased responsibilities with their school district.

“Suggesting a cut to educator pay in the time of a teacher shortage is a terrible policy decision and it’s irresponsible. Our state had just begun to make progress in efforts to attract and keep great teachers on the job with last year’s salary gains.  Cutting pay -- and our ability to negotiate terms of employment with our employers -- is an unacceptable step backward.”

WEA members stand firmly against this attack on those who dedicate their lives to educating students.

Contact your legislators now to tell them to oppose this bill in its current form.