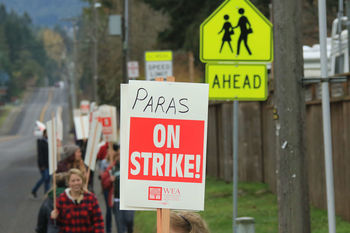 Port Angeles paraeducators stand united for a contract that values and respects educators.

Teachers and the district's other certificated staff, including counselors and therapists, voted earlier this week to not cross the striking paraeducators’ picket lines.

“We believe it’s important that educators in this community stand together and show we are united," said Eric Pickens, president of the Port Angeles Education Association. "The district can choose to resolve this tomorrow, or they can continue to stall and drag out negotiations. It’s time to get this settled.”

At issue is the district’s refusal to pass along McCleary salary increases from the state to raise pay for the district’s mostly female support staff. The state boosted the funding it sent to Port Angeles by 39.8 percent over just last year, in part to raise professional wages for paraeducators and other support staff. The increases were ordered by the state Supreme Court and approved by state lawmakers, and the funding was sent to the district. But, unlike other nearby districts, Port Angeles so far has refused to pass along the bulk of the salary increases to its support employees.

“We sincerely hope the district understands that it’s time to prioritize students and end this attempt to divert the McCleary salary money into other pet projects,” Pickens said.

Brewer has continued to drag out negotiations for more than two months after the paraeducators’ contract expired Aug. 31, and has offered paraeducators a smaller raise than other employee groups.

Posted in: Professional pay | WE Are WEA | Contract-Related
Back to Blog