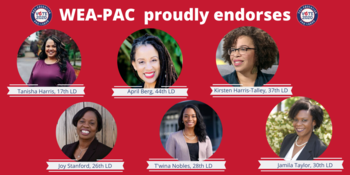 We know that representation matters, and that’s why it’s notable that so many African American candidates made it through the primary.  Never in Washington’s history have we had the opportunity to send such a diverse group of candidates to Olympia.  In our August 4 primary, talented candidates across the state came one step closer to having their voices amplified in Olympia.

Most notably, T’wina Nobles in the 28th District (near Lakewood) is in a tight race for state senate with an incumbent she’ll challenge in the general election.  T’wina is a former educator herself, having worked as a teacher in Tacoma for 5 years and a paraeducator in University Place for 5 years.

In the 30th Legislative District, the winning candidates for both state house races were WEA-endorsed, attorney Jamila Taylor and educator Jesse Johnson.  Both of these candidates won by large margins so we can expect strong results in the general election, too.

Voting is a way to show our values. That’s why we're thrilled to stand in support of these African American leaders, and hope to see their voices added to the state legislature.  To find the WEA-endorsed candidates in your area, visit our voter guide.

5 reasons why educators back Chris Reykdal

Get to know T'wina Nobles