Rather than blame educators, now is the time to restore school levy flexibility 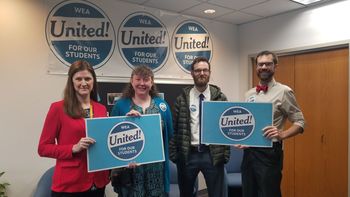 Union members from Ridgefield Education Association were in Olympia talking to legislators about restoring levy flexibility.

Some legislators, anti-union groups and school administrators are wrongly blaming WEA members for the budget cuts and layoffs many districts are threatening.

These claims are ludicrous and false – and they ignore reality.

As professional educators, we put our students at the center of everything we do – which includes our advocacy for ample state and local school funding. Even with recent state funding increases, our students and schools are facing significant budget challenges. With the legislative session set to end April 28, we need legislators to focus on solutions, not blame.

Investing in caring, qualified, committed teachers and support staff should be every school district’s top priority. And that requires competitive, professional pay and benefits, especially when we have a severe teacher shortage.

In its McCleary decision, which was a major victory for K-12 public schools and students, the Washington Supreme Court was clear: competitive, market-rate salaries for school employees are a crucial part of the state’s obligation to amply fund basic education.

Because of McCleary, the Legislature sent school districts $2 billion in new state funding to pay for competitive salary increases in the 2018-19 school year. That was in addition to billions for all-day kindergarten, smaller K-3 class sizes and other needs. As we emphasized throughout contract negotiations last summer and fall, school districts have the resources to provide competitive pay for certificated educators and support staff.

The need for competitive pay is real. 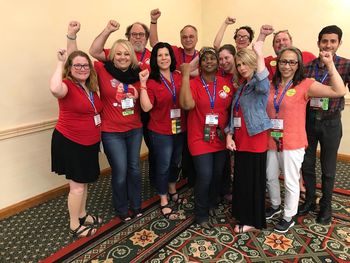 We have a well-documented teacher and school staff shortage, including paraeducators, bus drivers and other school employees. For years, school salaries have fallen further behind other states and other professions. The significant pay raises negotiated by WEA members this year were long overdue.

Now that our salaries are starting to catch up, some legislators are pointing fingers, and administrators are threatening layoffs. Instead, we believe they need to focus on a solution: removing legislative restrictions on local school levies. (Listen to WEA's radio ad.)

When the Legislature approved billions in new state funding for schools, it fell short in areas such as special education and funding for smaller class sizes in grades 4-12. Legislators also voted to dramatically restrict local school levies, despite staunch opposition from WEA at the time.

This year, some school districts are receiving less than half the levy money they did previously.

That is a problem, because voter-approved school levies provide a significant part of most school districts’ budgets. It’s this reduction in local levies that is driving most of the talk about school budget cuts.

And as we’ve noted all along, the McCleary decision did not require the Legislature to reduce local levies. It was a political decision, and many legislators promised they’d fix it later. 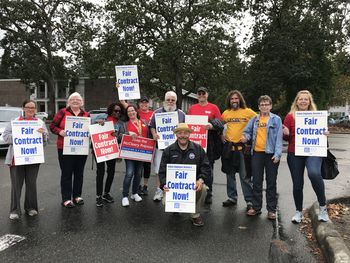 Well, now is the time to fix it by restoring the local school levy flexibility legislators took away. House Bill 2140 is WEA’s preferred bill, because it restores levy capacity as a percentage of a district’s total state and federal funding, which is the formula that was in place until this year. Senate Bill 5313 (without previous bad amendments) would also increase levy capacity.

Fortunately, most legislators recognize that levies and other parts of the McCleary funding package need improvement. Without action soon, levy cuts will hurt students across the state, from Seattle (54,000 students) to Asotin (600 students).

Here’s what a bipartisan group of Pierce County legislators promised in September 2018:

WEA is working with allies in Olympia to restore school levy flexibility and to increase overall state funding for K-12 public schools, including special education funding.

WEA members stand by the need to pay competitive salaries to attract and keep great teachers and staff for our kids. Parents, voters, legislators and the Supreme Court agree that competitive pay for educators should be a budget priority in every school district.

Now we need the Legislature to allow local voters to meet their students’ needs by restoring levy flexibility.