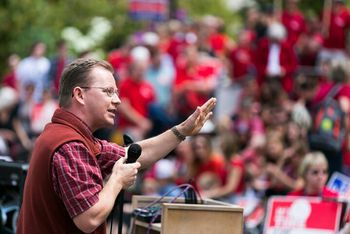 The Legislature has increased funding for K-12 public schools by billions of dollars because of the McCleary decision – including $2 billion to increase educator salaries in the 2018-19 school years.

“The Legislature’s intent, related to fully funding education, is putting the money toward that which the court has said it needs to go, and that is salaries,” said Rep. Mike Pellicciotti. “I would expect school districts are going to be honoring that requirement.”

The money is there, yet some superintendents are blocking pay raises for teachers and support staff. They continue to claim there’s a cap on salary increases for certificated and classified employees this year. But Superintendent of Public Instruction Chris Reykdal shot down that idea in a memo last week.

There is no cap on the size of pay raises that can be negotiated for certificated and classified staff this year, Reykdal said.

“(There are) allowable salary increases in six additional categories above inflation,” Reykdal wrote. “In short, I believe (legislators) adopted a wide-open collective bargaining framework, even in 2018–19…” 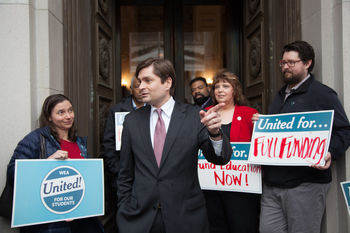 Proving Reykdal’s point, some WEA locals have negotiated significant pay raises in the last month. The best settlements range anywhere from 15 percent to 34 percent for the school year that starts Sept. 1

More than 200 WEA locals across the state continue to negotiate pay raises.

WEA’s message to school administrators and school boards is simple: You have the money. It’s intended for educator salaries. Now negotiate the competitive, professional salaries needed to attract and keep caring, qualified teachers and support professionals for your students.

Don’t accept excuses from your school board or superintendent – or anyone else. Thanks to McCleary, the money is there. $2 billion for classified and certificated pay raises – this year. That is money legislators earmarked for salaries. Don’t let your district administrators squander it on something less important.

Competitive, professional pay is needed to attract – and keep – quality teachers and support professionals for our students. That’s true in every district.