Members of the Washougal and Evergreen education associations in Clark County both went on strike today. Longview teachers started striking last week, and on Wednesday, Aug. 29, teachers in Vancouver and several other Southwest Washington districts are expected to strike.
Other WEA locals have voted by large majorities to strike if they don’t reach tentative agreements by the start of school.
In sharp contrast, Everett Education Association members and their administration reached a tentative agreement on a new contract with a top salary of nearly $121,000. They join WEA members in dozens of other school districts who have negotiated pay raises in the double-digit percentages.
According to The Herald: “As Everett Education Association President Jared Kink announced the figures, the nearly 1,000 union members gathered at the Everett Civic Auditorium shouted their joy and rose for an extended standing ovation.”
Substantial pay raises are the goal in every district, yet in some communities, superintendents and their school boards are lowballing teachers and support staff. In Puyallup, for example, the superintendent so far refuses to offer anything beyond a minimal increase.
How did we get to this point? Here’s a quick history:
In its 2012 McCleary decision, the Washington Supreme Court ruled that the state of Washington was failing to amply fund basic education as required by the state constitution, and the court ordered lawmakers to increase funding for K-12 public schools. 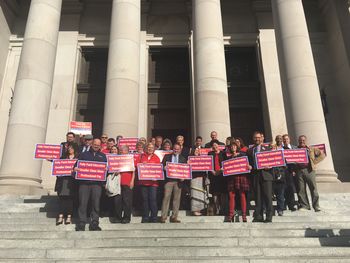 WEA members have supported and funded the McCleary court case for years.
The Legislature passed a budget last year that increased school funding by billions, including $1 billion for salaries in 2018-19. (The rest of the additional funding was for priorities like smaller K-3 class sizes, transportation and all-day kindergarten.)
Last fall, the court ordered the state to increase funding for educator salaries by another $1 billion to meet a Sept. 1, 2018 deadline (that's this Saturday). In March, legislators did exactly that – they approved an addition $1 billion for educator salaries in the 2018-19 school year.
The Supreme Court was clear that the additional state funding approved by the Legislature in March was specifically for pay raises. Last fall, the Court unanimously directed lawmakers to invest “a billion dollars in fully funding the salary increases by the 2018-19 school year.”
The end result: Washington school districts have $2 billion in additional funding for salaries, in addition to billions more for other needs. Every school district is getting more funding overall in 2018-19 and in future years.
Despite the increase in funding, superintendents and school boards in some districts are falsely claiming they are receiving less money because of the McCleary decision.
Don’t believe it.
Posted in: Education funding | Professional pay | Bargaining rights | Local control | Legislative Issues
Back to Blog