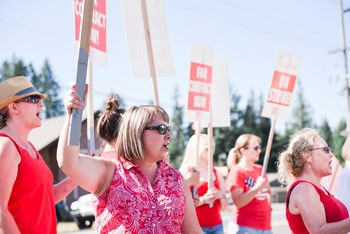 Striking teachers in Kennewick and Toutle Lake have reached tentative contract agreements with their district administrators.

WEA members in Kennewick and Toutle Lake are on strike for the third day in their fight for fair contracts with competitive, professional pay.

Administrators and school boards in both districts are making excuses and blaming their employees instead of showing leadership.

“Despite record increases in state funding for public schools and healthy budget reserves, Toutle Lake School District administrators are falsely claiming they can’t provide the pay raises needed to attract and keep qualified teachers and support staff for their students,” according to the Toutle Lake Education Association.

In Kennewick, district administrators are threatening to take teachers to court even though negotiations are continuing today.

“Showing a lack of respect to the public and engaging in intimidating behavior toward KEA members, they chose to do this without having a school board meeting,” Kennewick Education Association leaders said.

Demonstrating their commitment to their community, Kennewick educators walked the picket lines for a third day Thursday – and ran a food drive for local charities. They have a “Full Force Friday” community rally planned as well, and they are enjoying strong support from students, families, local businesses and union allies.

The number of WEA locals on strike could increase. Ellensburg Education Association members have voted to strike if they don’t have a tentative agreement by the start of school next week.

Meanwhile, WEA members across the state continue to negotiate new contracts but haven’t voted to strike – yet. District administrators in several districts refuse to negotiate competitive pay for education support professionals, who often are the lowest-paid employees in a district.

Members of the Lake Washington Education Support Professionals union are still in negotiations with district administrators who refuse to pay them what they are worth.

“For the LWESP members who support our entire school community, bargaining with the district has never been easy. We have to fight to get closer to a living wage. We have to fight for respect,” union leaders said.

Sumner Paraeducators Association members also are trying to negotiate pay raises. District administrators refuse to provide anything beyond the state-funded cost-of-living adjustment, which merely keeps up with inflation.