Teachers remain on strike in seven districts – more are possible

Teachers in Evergreen and six other school districts are on strike.

“I’ve never gone on strike before,” said Tiffany Schumaker, a teacher at Mountain View High School in the Evergreen School District. “It’s super-encouraging, the community support we’ve had this week.”

“Teachers have been paid too little for too long,” she said. 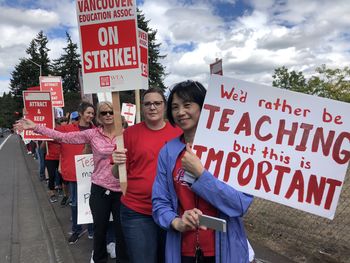 Vancouver teachers are on strike over fair pay.

Teachers are on strike in Vancouver, Evergreen, Ridgefield, Hockinson, Battle Ground, Washougal and Longview. WEA members, parents and supporters in each of the seven districts can email their school boards and superintendents on this WEA page.

“We need professional pay that is commensurate with other careers,” said Vancouver teacher Darlene Harris, a teacher since 1975. “The money is there, but I do not feel valued.”

Educators in a number of other districts have voted to strike next week if their superintendents don’t offer fair contract settlements by the start of school. They include Monroe, Wapato, Stanwood-Camano, Puyallup and Sumner.

Educators have a historic opportunity to negotiate significant pay raises this year, thanks to $2 billion in additional salary funded allocated by the Legislature because of the Supreme Court’s McCleary decision. Competitive, professional pay is needed to attract and keep caring, qualified teachers and support staff for our students. Without competitive pay, school districts run the risk of lose educators to higher-paying professions or school districts.

WEA local unions still in negotiations as of Aug. 31: