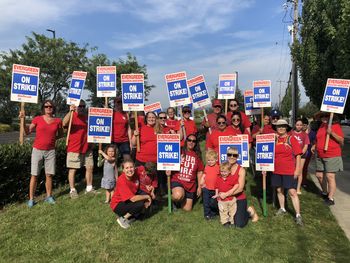 WEA members in seven school districts were on strike today – six of them in Clark County in Southwest Washington.

This map shows both the strikes and the best local contract settlements. 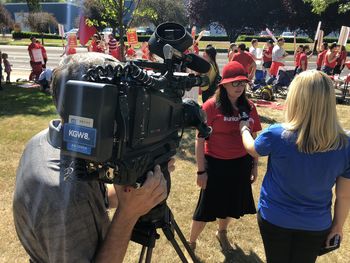 Vancouver EA member Bethany Rivard does a TV intervew on the picket line.

Approximately Washington 80,000 students aren’t in school this week. Why? Because their school district superintendents refuse to negotiate fair pay for their teachers.

Many striking WEA members wonder if their superintendents agreed beforehand not to settle fair contracts with competitive pay raises for their teachers and staff. Media reportedly are looking into the possibility of collusion among Clark County superintendents.

Community support for striking teachers is extremely strong in these seven districts, forcing superintendents in Vancouver and Washougal to back off initial threats of legal action against their teachers.

“The best thing about this strike is the massive show of support from the community, followed closely by the incredible esprit de corps felt by our members as we have unified for a common cause,” said Scott Rainey, a Washougal Association of Educators member.

Cheyann Strom graduated from Evergreen public schools in 2013. She joined her former teachers on the picket line at Covington Middle School today. 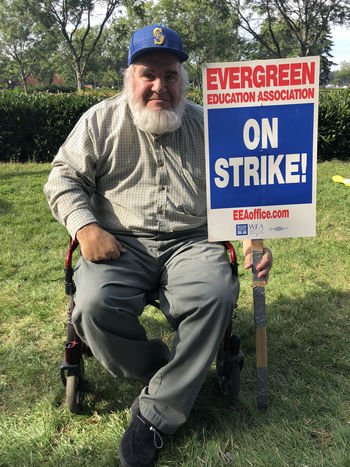 “I want to support Evergreen teachers so they get what they are worth in compensation. My teachers made a big impact in my life,” Strom said. “I think that’s worth so much more than they get – it’s almost priceless what they do for our youth and what they did for me.”

Even retired teachers were on the line today.

“I’ve got a dog in this fight. I taught here at Covington for 28 years, and now I sub three times a week,” said retiree Michael Sanders, who is undergoing kidney dialysis.

These strikes come at the same time that WEA members in dozens of school districts have negotiated historic double-digit percentage pay raises. The latest settlements were in Kent, Franklin Pierce, La Conner and Sultan.

Here is the new WEA ad airing on cable TV in Clark County: