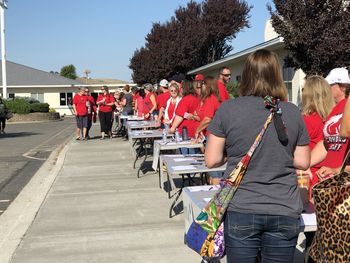 Ellensburg EA announced that it reached a tentative contract agreement with the school district mid-Friday afternoon, thus avoiding a strike. EEA members will meet Monday evening to vote on the contract. If ratified, school will begin on Wednesday.

Both Kennewick and Toutle Lake ratified their contracts today.

Late Thursday, bargainers reached tenative agreements in Kennewick and Toutle Lake. Kennewick EA members will hold their general membership meeting on Friday at 10 where they will vote on the contract. Toutle Lake EA members gather for their meeting Friday afternoon.

KEA president Rob Woodford said, "We are so proud of our dedicated bargaining team, of one another for standing up for the students in Kennewick and to our parents and other community members for their unwavering support."

"Our bargaining team really came together to get our union the best deal and we can't wait to get back to our classrooms," said Shawn Clark, the president of Toutle Lake EA.

WEA members in Ellensburg are still bargaining, and have taken a vote to strike if no agreement is reached by the start of school next week.

Meanwhile, WEA members across the state continue to negotiate new contracts but haven’t voted to strike – yet. District administrators in several districts refuse to negotiate competitive pay for education support professionals, who often are the lowest-paid employees in a district.

Members of the Lake Washington Education Support Professionals union are still in negotiations with district administrators who refuse to pay them what they are worth.

“For the LWESP members who support our entire school community, bargaining with the district has never been easy. We have to fight to get closer to a living wage. We have to fight for respect,” union leaders said.

Sumner Paraeducators Association members also are trying to negotiate pay raises. District administrators refuse to provide anything beyond the state-funded cost-of-living adjustment, which merely keeps up with inflation.