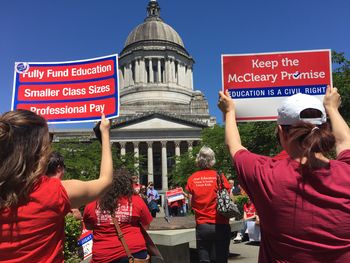 Thanks to the hard work of WEA members, public schools and students have made major gains in recent years.

Funding for Washington’s public schools and students is at an all-time high.

“This is terrific news for Washington’s 1.1 million public school students and proof that WEA members’ hard work and commitment to our students is paying off – literally,” says Kim Mead, Washington Education Association president.

The new two-year state budget increases funding for K-12 public schools by $4.5 billion over the previous two-year period, from about $22.5 billion to $27 billion.

That’s a nearly 20 percent increase in funding for Washington’s K-12 public schools, mainly because of the continued implementation of court-ordered McCleary funding and new policies. K-12 funding is now more than half of the state’s general fund budget. Nearly every one of our 295 school districts has substantially more funding than last year – and they will next year as well. 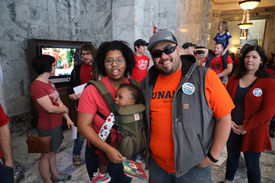 The Legislature also increased local school levy flexibility, which could raise as much as $645 million in additional school funding in coming years.

Still, she said, “It’s important to recognize and celebrate the historic progress we’ve made on school funding in Washington and meeting the needs of all students. WEA members believe what the Constitution says: funding quality education for all our students is the state’s paramount duty.”

Unfortunately for their students, there are a small number of school district superintendents who continue to push for unnecessary budget cuts and reductions in staff. Mead said WEA stands firmly opposed to reduction in teachers and other staff who directly support students. She said unnecessary cuts will hurt students, including overcrowded classrooms and fewer services. 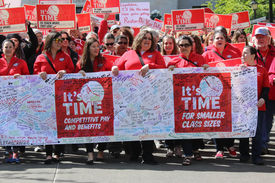 In some districts where WEA members are in contract negotiations, school boards are threatening budget cuts as a bargaining tactic, not because cuts are necessary.

However, many school boards and administrators who originally threatened layoffs and deep budget cuts have since backed off after pressure from local WEA members and parents.

Over the last two decades, WEA members have led the fight to increase funding and resources for our students. We’ve had many allies along the way, but let’s be clear: as the state’s largest union, Washington Education Association members have been the strongest advocates for our students and the resources they need to be successful. We have played leadership roles in these school funding victories:

And our work isn’t over – WEA members in at least 160 locals will be in contract negotiations again this year. Competitive, professional compensation is needed to continue attracting and keeping qualified, caring educators for our students.

“We can’t go backwards,” Mead said. “Even when we face opposition, WEA members will continue to focus on what matters most: our students.”

Standing for Our Students during Our Revenue Challenges