Time to negotiate BIG pay raises for all 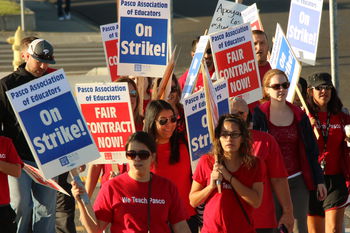 Pasco educators went on strike over fair pay several years ago. This year, WEA members across the state stand united in support of substantial pay raises.

What kind of pay raises are possible? For certificated staff, 15 percent or more. For classified education support professionals, pay increases as high as 37 percent.

That's right – double-digit pay raises are possible for all of Washington's K-12 public school employees. But only if WEA members get active and involved in local contract negotiations and fight for the fair pay we all deserve.

This is a realistic goal. In response to the McCleary court case to amply fund basic education for our state's 1.1 million public school students, the Legislature:

School districts have the money. Yet despite recent pay gains, many school employees feel like we're falling behind or barely keeping even.

Despite recent pay gains, many school employees feel like we're falling behind or barely keeping even.

Further, we have a shortage of qualified certificated and classified staff, the job market is booming, student debt is high and housing costs are skyrocketing – more reasons why a major pay raise for educators is reasonable.

"We've spent years in the courts, at the ballot box and in the Legislature getting to this point – now is the time to negotiate together for competitive, professional salaries for K-12 educators in every Washington school district," said Kim Mead, WEA president. "This is our opportunity to keep and attract great educators for our students. But it's not a done deal; those funds still have to be bargained by every local association in the state."

With a united membership behind each local association, we have the power to achieve the results our students deserve: the ability to keep and attract caring, qualified, committed educators in our schools. Now, more than ever, we need to stand united together as a union and negotiate fair pay for our work.

The time is now.