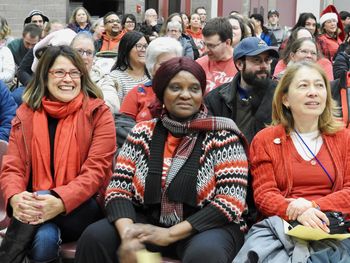 More than 500 Vancouver ESP members recently turned out for their general membership meeting.

Their classified colleagues may be next to walk out.

On Dec. 12, more than 500 members of the Vancouver Association of Education Support Professionals (VAESP) voted to take a strike vote if they don’t receive a fair contract proposal from district administrators by Feb. 1.

It was a unanimous vote – and the union’s largest-ever general membership meeting. VAESP members vowed to fight for the pay raises they need and deserve.

“The union has brought us together,” said Roya Nasseri, a secretary at Discovery Middle School. “If there wasn’t a union, the district would have given us 3.1 percent and that would have been it. Now it’s times for solidarity and a show of force.” 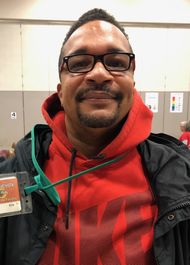 Because of the McCleary Supreme Court decision, the Washington Legislature approved billions of dollars to improve salaries for all K-12 school employees – not just certificated staff, but also education support professionals. Yet Webb, just like he tried to do with teachers, is offering VAESP members a fraction of the new state funding his district received.

“The money that was sent down from the state, if it’s not going to salaries, it’s going to some other account,” Nasseri said.

Korin Mason, is a one-on-one staff assistant in the developmental skills program at Lincoln Elementary. Among VAESP members, her situation is typical.

“I am one of those who has to work multiple jobs to support myself,” Mason said. “I’m a college-educated woman, and I should be compensated competitively.”

In September, after Vancouver teachers went on strike, the school board granted Webb a pay raise – increasing his base salary to $254,000. According to The Columbian, Webb’s “contract also includes an additional $2,784 per month above and beyond Webb’s salary that can be placed in a tax-sheltered annuity.”

Jamayne Figueroa is in his second-year as a paraeducator at Fir Grove school.

“I love my job,” Figueroa said. “I get to work with kids who have challenges. I help students who have a tough time in regular schools.”

Figueroa has a message for Superintendent Webb:

“His monthly bonus (adds up to) more than my yearly salary. If I could meet him, I’d say, ‘Come sit in our classrooms all day and then tell us what we are worth.’ ”