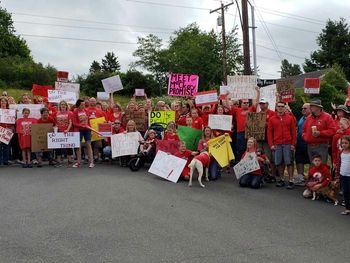 WEA members in Stanwood-Camano are among the many educators supporting their bargaining teams and the fight for fair pay.

Here’s WEA’s new interactive map that shows the negotiated pay raises for each local union that has reached a contract settlement this summer.

WEA members in other parts of the state are winning significant pay raises as well. Because of WEA’s victory in the McCleary Supreme Court case, every school district is receiving more funding overall -- including a total of $2 billion in funding intended to increase salaries.

In its McCleary decision, the Court said, “Nothing is more basic than adequate pay.”

And some ESP locals are making big gains, too. Woodland Secretaries negotiated a 15 percent pay hike for the coming school year.

More than 250 WEA locals are negotiating pay this summer, and the vast majority of them are still at the bargaining table. Professional, competitive pay is needed to attract and keep caring, qualified teachers and support staff for students in every school district in Washington.