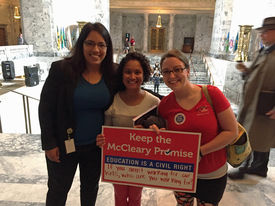 Rep. Kristine Reeves met with WEA members Tuesday in the capitol rotunda. Message: Don't back down!

And on Tuesday, they were both first-time lobbyists in Olympia, tracking down their lawmakers to talk about the House and Senate’s competing budget plans.

“The Senate budget would reduce teacher pay and increase class sizes,” said Lazenby. “It would reduce our ability to collectively bargain, and that would make our jobs even harder than they already are.”

Davis and Lazenby joined Seattle Education Association President Phyllis Campano, who is helping organize Occupy Olympia and Resist the Senate Budget in Olympia. Every week day until May 12, dozens of WEA members are traveling to the state capital to lobby in support of the House Democrats’ K-12 budget and to oppose the Senate funding plan.

“We’re here to fight for our kids,” said Campano. “We’re extremely passionate about what we do. Legislators need to hear our stories and know that what they do in Olympia affects us.”

North Thurston middle school teacher Katie Agren said she took leave from the classroom Monday because she wants legislators and her educator colleagues to know what’s at stake.

“As a social studies teacher, I’m trying to educate others about the budget,” Agren said.

Here’s a comparison of the two budgets.