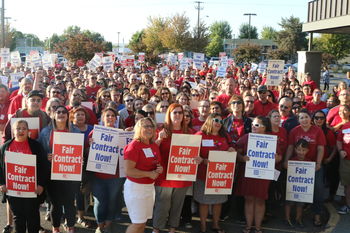 Standing united together, Kennewick EA union members may go on strike this week.

WEA members in Toutle Lake and Kennewick are on strike as of Aug. 27.

Educators in Seattle and La Center reached tentative contract agreements with their districts over the weekend, while WEA members in dozens of other school districts continue negotiating.

“Remember to take home whatever you need from your classrooms and be aware that you could lose computer access after school this afternoon,” Kennewick Education Association leaders told union members on Facebook.

Competitive and professional pay for teachers and education support professionals continues to be a top issue in most districts.

“Our SEA Bargaining Team negotiated a tentative agreement that focuses on the needs of Seattle students and makes them a budget priority,” said Phyllis Campano. “Highlights include competitive pay raises, support for school racial equity teams and additional nurses and counselors and other support for the whole child.” 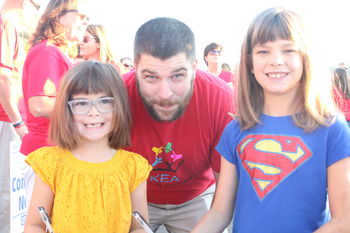 Kennewick EA members are fighting for competitive pay raises to continue attracting and keeping caring, qualified staff for their students.

The three-year SEA agreement raises certificated pay by 11.1% and 12.1% for office professionals and paraeducators.

According to The Seattle Times, “The raises provided in the tentative agreement are a far cry from what the district had originally said it could afford, about 2%. But pressure from the union — including public demonstrations and an audit of the district’s budgets and spending —appeared to shift the dynamic over the weekend.”

More than 180 WEA units had fully or partially open contracts this year. Some, such as Mukilteo and Northshore, reached settlements early on. Others continue negotiations headed into Labor Day Weekend.

Last year was the first year of contract negotiations following major changes in state law governing teacher pay related to the state Supreme Court’s historic McCleary decision on school funding. The need for competitive, professional compensation continues across the state, even after the progress made last year.