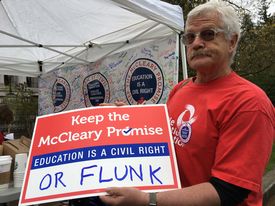 Kicking off two weeks of activity in the state capitol, WEA members are urging legislators to support the House Democrats’ budget -- and oppose the Senate Republicans’ funding plan.

“The reason I’m here? It’s about the kids,” said Toby Kemper, a middle school teacher from North Kitsap. “Everything in the Senate Republicans’ budget is bad for kids. (For example,) if you take away funding for smaller class sizes, that’s bad for kids.”

Zanati said she saw parallels between the Senate Republican budget and the anti-public education agenda of US Secretary of Education Betsy DeVos.

“This budget is a one-way ticket to gut public schools,” she said. 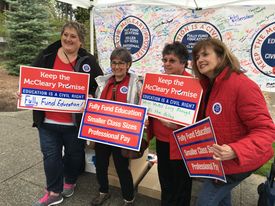 WEA members from Sedro-Woolley were in Olympia Monday to support the House Democrats' budget.

Every weekday through May 12, WEA members will be in Olympia advocating for smaller class sizes, competitive pay and increased school funding as required by the Supreme Court’s McCleary decision. On Monday, most legislators weren’t in Olympia, although both the House and the Senate are scheduled to be in session Tuesday, May 2. WEA members snapped selfies of themselves holding McCleary school funding signs in front of legislators’ vacant offices. They also dropped off McCleary postcards and sang songs in the capitol rotunda.

A group of WEA local association presidents is organizing the Olympia actions, which they are calling “Occupy Olympia and Resist the Senate Budget.”