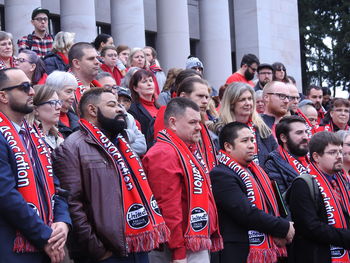 “I am here (on) WEA Lobby Day for my students, who need me to be a voice for them so they have what they need to be successful in the future,” said Nicole Burke, who teaches fifth grade at Seattle Hill Elementary in Snohomish.

Burke and educators from across the state came to the capitol to meet with legislators and other elected leaders and to advocate for WEA’s student-focused legislative goals, including combating racism, eliminating discrimination and promoting equity.

Supt. of Public Instruction Chris Reykdal, Secretary of State Kim Wyman, Treasurer Duane Davidson and Lt. Gov. Cyrus Habib met in their offices with educators. Speaker of the House Laurie Jinkins and Gov. Jay Inslee spoke at a WEA rally on the steps of the capitol. State Rep. Monica Stonier, a WEA member, also addressed the crowd, thanking them for being there as advocates for students and public education.

At the rally, WEA President Larry Delaney and Vice President Janie White both invoked the words of Dr. King and emphasized the diversity of WEA’s membership.

“I can’t help but think that if Dr. King were with us today, he would have some thoughts on the state of public education and organized labor,” Delaney said.

“I love it when we come together in numbers to stand up for our students, educators, parents and our community,” White said. “We all know that when we stand together to fight for what we believe in, we can achieve great things.”

“I’ve never believed Martin Luther King Day is a day off. It’s time to have a day ON,” said Connor Lee, a Seattle Education Association member and paraeducator at STEM K-8 school. “It’s important to be here and to be a voice for public education and students.”

“For me, being here is a community sense of duty.”

Regarding specific legislation, Lee said the Legislature needs to do more to support paraeducators, including fully funding the required days of training

“We need more recognition and respect for the work of paras,” he said.

“You all are there on the frontlines addressing the disparities and addressing issues of racism and race and equity in our classrooms,” Sen. Emily Randall told WEA members in a special briefing session.

Besides meeting with their local legislators, some WEA members testified in support of legislation during Lobby Day. A group of education staff associates testified in a committee hearing on House Bill 2012, which would pay them the same salary bonuses National Board Certified teachers currently receive.

“By approving this legislation, you will be showing the State of Washington and all ESA Certified Staff that you recognize and encourage higher levels of certification,” said Elizabeth Pray, a nationally certified school nurse from Moses Lake. “You will also be recognizing everything that Nationally Certified School Nurses in Washington have done to improve our practice and help student success.”

Delaney said that while the era of the McCleary school funding court case may be over, WEA members must continue to fight to ensure students and public schools have the resources they need and deserve.

“There is still much work to do,” he said.