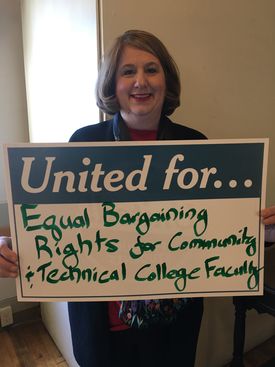 It took more than a decade, but WEA's higher education members have scored a huge victory for the freedom to negotiate fair pay.

The bill now goes to the state House of Representatives for a routine vote of concurrence, and then Gov. Jay Inslee is expected to sign it. It passed both houses with bipartisan support.

"I'm elated," said Carla Naccarato-Sinclair, president of WEA Association of Higher Education (AHE). "Finally we got a win for our community and technical college faculty members in the state. It has taken a long time to achieve the same bargaining rights as all the other educators in Washington.

"It's a union victory at a time we're under attack. It shows why we need to be part of WEA - we have a voice. If we didn't stand together as WEA members this would not have passed."

Faculty at Bellingham Technical College went on strike over pay several years ago. BTC instructor and longtime WEA member Lee Falta shared Naccarato-Sinclair's enthusiasm - she has helped bargain several contracts in the past.

"I'm pretty excited about it. It's a big relief," Falta said of the bill's passage. "Now I can go to the bargaining table and have something to talk about with the administration."

The freedom to negotiate better salaries with local funding will provide stability and allow colleges to attract and keep quality faculty for their students.

Substitute Senate Bill 6388 passed out of the House 98-0 yesterday. The bill makes adjustments to last year's landmark legislation that created a professional development system for paraeducators.

Paraeducators will now have an additional year to meet minimum employment standards.

'I'm here to get our point across to legislators' 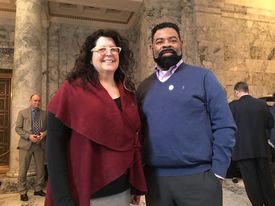 On Feb. 28, nearly 100 WEA members and staff from around the state lobbied legislators in Olympia to pass a budget that increases funding for K-12 educator salaries as required by the Washington Supreme Court.

In November, the Court ordered lawmakers to increase funding for salaries by $1 billion in the upcoming 2018-19 school year. The Legislature adjourns March 8.

"I'm here to get our point across to legislators," said Len Hill, a Seattle Education Association member who teaches at Hawthorne Elementary in the district's south end. "It's very important, because without having a voice down here in Olympia, we're not going to get heard."

The additional state salary funding will help school districts provide professional, competitive base salaries, which are crucial to continue attracting and keeping qualified, committed, caring teachers and support staff for students across the state.