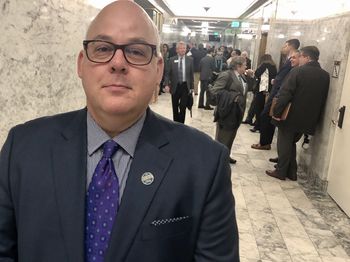 On Wednesday afternoon, WEA President Larry Delaney testified in opposition to House Bill 2788, which would divert milions in public funding to privately run charter schools. Delaney testified before the House Appropriations Committee. Here is his testimony as prepared.

I am Larry Delaney, a high school math teacher and president of the state’s largest union of public school educators, the Washington Education Association, and I am before you today to urge you to oppose House Bill 2788.

Working together, we have made great strides toward funding the quality public schools our Constitution promises. Yet the state continues to fall short on fully funding special education, mental health services, school safety and needs such as nurses, psychologists, social workers and other professionals who support our students both inside and outside the classroom.

Last week, hundreds of WEA members were here in Olympia meeting with their legislators about both local and statewide educational issues. Too often, educators were told there just is not the funding to address their needs. WEA members believe it would be unacceptable for the Legislature to divert additional public funding to privately run charter schools when the needs of ALL Washington students remain unmet.

While we are debating this bill in the Washington State Legislature, it is impossible to discuss charter schools outside of the larger political context.

Charters are part of a national agenda led by US Secretary of Education Betsy DeVos to privatize public education by diverting public dollars from public schools, overseen by locally elected school boards, to private organizations that are not accountable to taxpayers or local voters. And although not a part of this bill, the DeVos privatization agenda also includes publicly funded vouchers for religious schools and tax credits that subsidize private schools at the expense of public schools.

Our state’s public school educators believe diverting public funding to unaccountable, privately controlled schools is wrong for Washington and ignores our state’s constitutional promise for an ample basic education to all our state’s students.

Please reject the DeVos privatization agenda -- and support the needs of all our state’s public school students -- by opposing House Bill 2788.

Speaking Out Against the edTPA