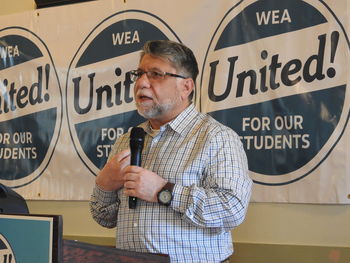 Next week, our second Unity Day is on Wednesday. We expect 100 educators to come to Olympia to advocate for the Senate’s education budget. See below.

The Senate budget, as introduced to the public and voted off the Senate floor, meets the state Supreme Court’s order to fully fund public education this year by providing about $777 million for salaries to attract and retain quality educators.

Both the Senate and House plans reduce the state-imposed property tax by relying on increased revenues.  WEA supports the Senate’s plan.

The House budget as originally introduced did not include the 2018 phase in of educator salaries. For this reason, WEA President Kim Mead testified in opposition to the House budget. As of Friday afternoon, the House had drafted a new budget striking amendment that adds in salary funding to meet the state Supreme Court’s most recent McCleary order. The House considered almost 70 amendments to the budget and ran out of time Friday night. They will reconvene Monday morning when they are expected to pass the budget. We’ll provide a complete update once the budget is approved.

After the House passes its budget, the two chambers will have nearly two weeks to iron out differences for the final budget.

SSB 6362 to “fix” McCleary funding is still alive in the House. We expect the bill to be heard over the weekend or Monday in the House Appropriations committee, where we will likely see amendments.

The capital funding bill, SSB 6531 was heard in the House Capital Committee. It features a phase-in schedule to prioritize elementary funding, followed by middle and high schools. Students from around the state testified in support of the bill, sharing stories about poor conditions within their schools. The bill has until Monday to move out of committee.

EHB 1237, our bargaining bill for community and technical colleges, is in the Senate Rules committee.

SB 5310 allows more options for working in retirement for people on the 2008 ERFs, including coaches, mentors and counselors. It is in the House Appropriations committee awaiting action.

E4SHB 1827, passed out of Senate Education Committee. This bill would increase conditional scholarships and loan forgiveness and includes provisions that would allow TRS and SERS members who retired using the 2008 ERFs to work as substitutes in any non-administrative roles in school districts.  It now goes to Ways and Means and then to the floor of the Senate.

SSB 6388 which will allow current paraeducators one more year to meet minimum employment requirements passed out of the House Education Committee on Thursday. It must pass off the House floor by March 2nd.