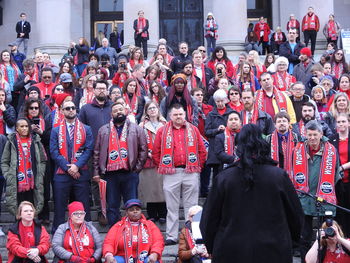 Nearly 500 WEA members from across the state converged on Olympia to share their stories, talk with their lawmakers about WEA’s legislative agenda and advocate for bills that support our goals. Read this for a full run-down of lobby day activities.

The Senate Early Learning K-12 committee held hearing on Wednesday for SB 6075 to increase the per pupil payment from the state for local effort assistance from $1,550 per pupil to $2,500. WEA supports this bill which will create a process to equalize local levies regardless of property wealth.

On Tuesday, WEA President Larry Delaney planned to testify in support of both Senate and the House bills SB 6077  / HB 2240 but testimony was limited. The bill would limit the number of rounds in a high capacity magazine. Delaney intended to say that public schools have spent millions of dollars on security systems and active shooter drills trying to keep our students safe, and that “It makes sense that our state should also pass common sense gun regulations at the same time.” This bill could be voted on in the House Civil Rights and Judiciary committee as soon as Thursday next week.

HB 2387  Would limit the exposure of public school students and school personnel to diesel emissions from school bus engines. WEA supports better air quality in schools. It had a hearing on Monday in the House Education committee.

The Senate once again passed E2SSB 5395, regarding comprehensive sexual health education and sent it to the House. HB 2184, a similar bill that we also support, had a successful hearing last week. We expect it to move out of committee prior to the first policy committee cut off.

HB 2382  Would permit community and technical colleges to investigate providing housing for faculty and staff.  It had a public hearing on Tuesday. WEA member Jennifer Jones from Highline College testified in support of this policy stating, “In order to remain competitive, our community and technical colleges need to attract and retain the highest quality employees. In urban areas, the high cost of housing may be a barrier to accepting a job offer.”

HB 2458 / SB 6479  Would allow districts to offer optional benefits if they are not offered as part of the School Employee Benefit Board program. These bills clearly state that districts have authority to continue VEBA plans and other benefits such as cancer care and financial protection plans through payroll deduction. It was heard in the House Education committee on Monday and Senate Ways and Means on Thursday. WEA has worked with a coalition of school administrators and insurance carriers in support of this bill.

On Thursday, the Senate Ways and Means committee held hearings on three other SEBB bills. WEA was opposed to the original version of SB 6189 because it eliminated benefits for substitutes, coaches and others with intermittent schedules; imposed higher costs for retirees; and prohibited dual enrollment between SEBB and PEBB programs. Many substitutes have contacted their legislators since these bills have been introduced. The groundswell of opposition has been heard and a new version of the bill was heard in Ways and Means. The new version is vastly improved as there are no benefit eligibility changes for substitutes, coaches and other intermittent workers, nor cost shifts to retirees. Instead, the new bill is focused on gathering more information which could inform future how the state can improve its funding in support of increasing benefit costs.

WEA remains opposed to the other two bills that were heard in Senate Ways and Means on Thursday: SB 6290, and SB 6296. If passed, these bills would result in loss of benefits for substitutes and coaches and higher costs for those who job-share. Nancy Paine, President of Edmonds Substitute Teachers Association also emphasized the important role that substitutes play in schools and the importance of maintaining benefits for those who are enrolled in SEBB.

SB 6138  Would provide additional support for teachers and mentors of color as part of the BEST program. It had a hearing Friday.

SB 6117 Is OSPI’s proposed funding for special education programs. It had a public hearing Wednesday in Senate Early Learning K-12 committee. This bill falls short of the $300 million funding gap that exists in special education.

A new bill, HB 2602, concerning hair discrimination, will be heard in House Civil Rights and Judiciary on Tuesday. This bill would prohibit discrimination because people have afros, braid, locks or twists. WEA supports this bill and is outraged that it is even necessary.

HB 2653  Is a bill to determine cultural bias in the WA Kindergarten Inventory of Developing Skills (WA KIDS) has been scheduled for hearing on Monday in the House Education committee. WEA supports this bill.

HB 2711  Would address equitable educational outcomes for foster care and homeless children. The bill calls for a work group to include people of color and those from low-income communities to implement a plan to eliminate racial and ethnic disparities in educational outcomes for youth in foster care, and/or who are homeless, by 2027. It is scheduled for a hearing Tuesday in House Education committee. WEA supports this bill.

SB 6262  Would require teaching local tribal history, culture, and government by 2022. It will be heard Wednesday in the Senate Education committee. WEA supports this bill.

HB 2240  To imit the number of rounds in high capacity magazines, and HB 2555, regarding background checks, could be voted on in the House Civil Rights and Judiciary committee as soon as Thursday.

HB 2708  Would establish a work group on school-based health centers. It has a hearing on Monday. WEA supports.

On Monday, Ben Ibale from WEA’s Center for Education quality will speak to the Senate Early Learning and K-12 committee in a work session about harassment, intimidation and bullying in the context of anti-bias training during a work session for the senators.

HB 2283  Would increase fairness, transparency and accountability in admissions to state universities. It has a hearing on Wednesday. WEA supports.

HB 2637  Would expand school library programs. It has a hearing Tuesday. WEA supports

HB 2690  Directs OSPI to create a statewide plan to integrate multi-tiered systems of supports (MTSS) in all local districts. It has a hearing Tuesday. WEA supports.

WEA supports these bills which will restore local levy flexibility to allow local voters to meet the needs of their students beyond state-funded basic education.

HB 2788  Would provide state funding to charter schools equal to the voter-approved levies of the school districts for which the charter is located up to a maximum of $1,500 per student. WEA President Larry Delaney will testify in opposition at the hearing Wednesday afternoon.

Stay current on legislative issues by taking any of the following actions: