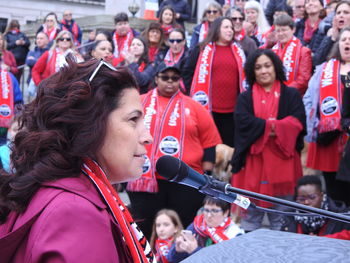 Stay current on legislative issues by taking any of the following actions:

HB 2551  Would permit students to wear traditional tribal regalia and objects of cultural significance at graduation ceremonies and related events.

HB 2653  Is a bill to convene a work group to determine if there is cultural bias in the WA Kindergarten Inventory of Developing Skills (WA KIDS). It had a hearing on Monday, where Olympia Kindergarten teacher Austen Anderson testified in support.

HB 2602  Concerning hair discrimination, had a public hearing on Tuesday, garnering much support. It was voted out of committee Friday afternoon. This is the bill that would prohibit discrimination because people have afros, braids, locks or twists. WEA supports.

HB 2711  Would address equitable educational outcomes for foster care and homeless children. The bill calls for a work group to include people of color and those from low-income communities to implement a plan to eliminate racial and ethnic disparities in educational outcomes for youth in foster care, and/or who are homeless, by 2027. It had a hearing Tuesday and could be voted on by committee Thursday. WEA supports.

SB 5834  Passed out of committee on Monday and moved to the Rules committee on Wednesday. This bill would inform parents about students’ rights to a free public education without regard to immigration status or religion. WEA supports.

SB 6066  Would expand ethnic studies materials and resources for K – 6 grades. It passed out of the Senate Early Learning and K-12 committee Friday. WEA testified in support.

SB 6262  Would require teaching local tribal history, culture, and government by 2022. It had a hearing on Wednesday. WEA supports.

HB 2240  Would limit the number of rounds in high capacity magazines, and HB 2555, regarding background checks. Both bills were voted out of the House Civil Rights and Judiciary Committee on Friday. WEA supports.

HB 2708  Would establish a work group on school-based health centers and had a hearing on Monday. WEA supports.

SB 6077  Passed out of committee and moved to Senate Rules. The bill would limit the number of rounds in a high capacity magazine. WEA supports.

HB 2382  Would permit community and technical colleges to investigate providing housing for faculty and staff. It passed out of House College and Workforce Development on Wednesday.

SB 6512  Would allow K-12 school districts establish affordable housing for employees in order to attract and retain all K-12 employees. Districts would also be able to work with their communities on cross-sector housing complexes. WEA testified in support.

On Monday, WEA staffer Ben Ibale spoke at the Senate Early Learning and K-12 committee’s work session about harassment, intimidation and bullying in the context of anti-bias training during a work session for the senators.

HB 2283  Would increase fairness, transparency and accountability in admissions to state universities. It passed out of the House College and Workforce Committee on Wednesday. WEA supports.

HB 2637  Would expand school library programs. It had a hearing on Tuesday. WEA supports.

HB 2690  Directs OSPI to create a statewide plan to integrate multi-tiered systems of supports (MTSS) in all local districts. It had a hearing Tuesday. WEA supports.

HB 2654  Would make college budgets, revenue and expenditures more transparent. It passed unanimously out of the House College and Workforce Committee on Wednesday. WEA supports.

SB 6132  Would add student behavioral health supports to the learning assistance program. It passed out of the Senate Early Learning and K-12 committee on Friday. WEA supports.

HB 2788  Would provide state funding to charter schools equal to the voter-approved levies of the school districts for which the charter is located up to a maximum of $1,500 per student.  WEA President Larry Delaney testified in opposition https://www.washingtonea.org/ourvoice/post/wea-president-delaney-testifies-against-bill-to-divert-public-funds-to-privately-run-charters/ at the Wednesday hearing.

HB 2387  Would limit the exposure of public school students and school personnel to diesel emissions from school bus engines. It could be voted on in the House Education committee as soon as Thursday. WEA supports.

HB 1860  Would test for lead in drinking water fixtures in schools. It could be voted on as soon as Thursday. WEA supports.

HB 1888  Is scheduled for a vote on Wednesday. It would limit the release of some personal information of government employees, including birthdates. Opposition from media outlets mean this will require a heavy lift to pass. Keep the pressure on: Send a message to your lawmakers to protect our privacy and pass HB 1888 early in the session.

HB 2184  Would require comprehensive sexual education with an affirmative consent curriculum. The House Education committee could vote on it as soon as Monday. WEA supports.

HB 2708  Would establish a work group on school-based health centers and could be voted in committee as early as Thursday. WEA supports

SB 6368  Will be heard in Senate Early Learning and K-12 Committee on Monday. This bill would allow employees to keep higher balances of sick leave than would be available under certain circumstances. WEA supports.

HB 2458 and SB 6479  Would allow districts to offer optional benefits if they are not offered as part of the School Employee Benefit Board program. These bills clearly state that districts have authority to continue VEBA plans and other benefits such as cancer care and financial protection plans through payroll deduction. HB 2458 could be voted on as soon as Tuesday and SB 6479 is scheduled for a vote on Wednesday. WEA supports.

HB 2637  Would expand school library programs. It could be voted on as soon as Thursday. WEA supports.

HB 2690  Directs OSPI to create a statewide plan to integrate multi-tiered systems of supports (MTSS) in all local districts. It could be voted on in committee as soon as Tuesday. WEA supports.

SB 6480 Would develop comprehensive school counselor programs. It has a public hearing on Wednesday. WEA supports.

On Wednesday the Senate Early Learning and K-12 committee will hear a package of bills that reflect the recommendations of the Staffing Enrichment Work Group that met this past year. WEA members joined with other education stakeholders to recommend a phase-in schedule for increases in school staffing and reductions of class size that were adopted by the voters through I-1351 in 2014. These bills meet several of our legislative priorities, and thus, WEA supports.

SB 6615  Would provide staff funding for school districts to phase-in full-funding of I-1351 by prioritizing investments that address student needs for safety, mental, social, emotional and behavioral health.

SB 5908  Would create a professional learning framework and model standards for all public school employees and school boards about equity and cultural competency in public schools.