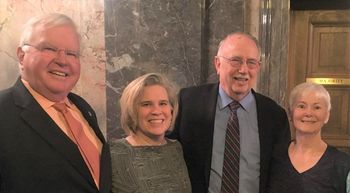 All bills needed to be passed from their originating chamber by Wednesday in order to stay alive for the session. Some bills may be excepted if they are deemed by the Legislature to be necessary to implement the budget.

Next Friday is the last day for bills to pass out of the policy committee of the opposite chamber.

HB 2551  Would permit students to wear traditional tribal regalia and objects of cultural significance at graduation ceremonies and related events. It has moved to the Senate, where it had a hearing Friday in the Senate Early Learning K-12 committee and was voted out of committee. WEA supports.

HB 2602  Concerning hair discrimination, would prohibit discrimination because people have afros, braids, locks or twists. It passed out of the House last week, had a hearing in the Senate on Wednesday and was voted out of committee on Thursday. WEA supports.

HB 2711  Would address equitable educational outcomes for foster care and homeless children. It has moved to the Senate and had a hearing Friday in the Early Learning K-12 committee. It could be voted on next week. WEA supports.

ESHB 1264 Is a bill that passed the House last year and has been taken up again this session. It would require OSPI to develop online training modules to support educators with secondary traumatic stress, and include it in the training topics if more training days are funded by the state. It has a hearing in the Senate Early Learning K-12 Committee on Monday. WEA supports.

HB 1860  Would test for lead in drinking water fixtures in schools. It passed the House on Wednesday. WEA supports.

HB 1888  Would limit access to employee photos, phone numbers and payroll deduction information. Only media outlets would have access to birth dates just as they do with law enforcement and criminal justice employees. It had a public hearing Friday in the Senate State Government, Tribal Relations and Elections committee. WEA Supports.

SB 5395  Had a public hearing in House Education on Thursday. The hearing was on a proposed substitute which is the same language that was in SHB 2184. Two WEA members, Melissa Boswell and Susan Sellers, testified in favor of this bill. WEA supports.

HB 2387  Would limit the exposure of public school students and school personnel to diesel emissions from school bus engines. The amended version requires OSPI to develop best practices and school districts to report how they are reducing diesel bus emissions. The billed died in House Rules. WEA supports.

HB 2382  Would permit community and technical colleges to investigate providing housing for faculty and staff. It did not make it out of the House. WEA supports.

HB 2458  Would allow districts to offer optional benefits if they are not offered as part of the School Employee Benefit Board program. The bill clearly states that districts have authority to continue VEBA plans and other benefits such as cancer care and financial protection plans through payroll deduction. This bill is supported by WEA, insurers, and school administrators and passed the House on Monday.

SB 6512  Would allow K-12 districts to establish affordable housing for employees in order to attract and retain all K-12 employees. Districts would also be able to work with their communities on cross-sector housing complexes. This bill is considered necessary to implement the budget and had a hearing in Senate Ways and Means on Thursday. WEA supports.

recommended COLA from the Select Committee on Pension Policy. Both bills passed out of their respective chambers with overwhelming support. WEA and WEA-Retired support this legislation.

SB 6141  Would make financial aid packages and processes easier to understand. It cleared the Senate on Tuesday. It’s been referred to House College and Workforce Development. WEA Supports.

HB 2660  Would expand school meals for students. It passed out of the House on Monday. It’s been scheduled for a hearing on Wednesday in Senate Early Learning and K-12. WEA supports.

SB 6132  Would expand the allowable uses of the Learning Assistance Program (LAP) to include student supports for behavioral health through a school-wide system of supports. It has been referred to the House Ed committee. WEA supports this bill.

SB 6480  Would develop comprehensive school counselor programs. It has been referred to the House Education committee. WEA supports.

HB 2116  Would establish a joint-select legislative task force on improving institutional education programs and outcomes. This task force will make recommendations about funding and educational improvements for students who are incarcerated in county or state facilities. It passed out of the House this week and will have a public hearing in the Senate Early Learning and K-12 committee on Wednesday. WEA supports.

SB 5834  Would inform parents about students’ rights to a free public education without regard to immigration status or religion. It has moved to the House and will have a public hearing and possible vote on Thursday. WEA supports.

SB 5908  Would provide equity and cultural competency professional learning for public school employees and school boards. It is scheduled for a public hearing and possible vote in the House Ed committee next week. WEA member Glenn Jenkins will testify in favor of this bill. WEA supports.

SB 6262   Would require teaching local tribal history, culture, and government by 2022. It is scheduled for a public hearing and possible vote in the House Ed committee on Thursday. WEA supports.

SB 6066  Would expand ethnic studies materials and resources for K – 6 grades. It is scheduled for a hearing and possible vote by the House Education committee early in the week. WEA supports.

HB 2458  Related to optional benefits offered by school districts has a public hearing on Wednesday in the Senate Ways and Means committee. WEA supports.

SB 6138  Would provide additional support for teachers and mentors of color as part of the BEST program. It has a hearing and possible vote on Thursday in the House Ed committee. WEA supports.

HB 2116  Would establish a joint-select legislative task force on improving institutional education programs and outcomes. This task force will make recommendations about funding and educational improvements for students who are incarcerated in county or state facilities. It has a public hearing in the Senate Early Learning and K-12 committee on Wednesday. WEA supports.

HB 2012 / SB 5821  Would provide equitable bonuses to K-12 ESA staff who achieve national certification through their professional organizations. Both bills had hearings in January, but never passed from their committees or made it to a floor vote, so are considered dead for this session.