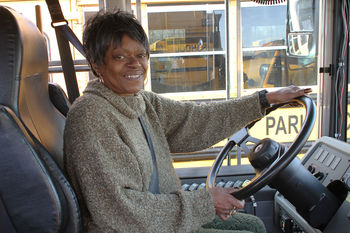 All the preparation and training Clover Park school bus driver Janice Batiste practiced in the last 30 years was put to the test in January when she found herself saving a choking passenger on her afternoon route.

Batiste is credited for saving a choking student on her afternoon route from Lakes High School in Lakewood near Joint Base Lewis-McChord.

"He talks all the time," Batiste says of the ninth-grade student passenger. "He kids a lot."

He was joking around with his friend across the aisle on Jan. 14 when he suddenly started coughing. His friend alerted Batiste and that’s when she heard the boy had something in his throat.

She looked over to her passenger in the front row and that’s when she knew something was wrong.

She pulled the bus over at one of the regular stops and asked the other students to get off the bus. The choking passenger also had managed to get himself off the bus and was on his knees, coughing. She got behind the student and started administering the Heimlich maneuver.

"It was like an out-of-body experience," Batiste recently recalls. "I didn’t even have time to really think about it until it happened. It just kind of kicked in, and I did what I needed to do."

"We get trained for that all the time but never think you have to use it," she says.

The student eventually coughed up a plastic ring from the cap of a soda bottle he had been chewing.

"I helped him help himself," Batiste says emphatically, dismissing the "hero" label some have given her. "We worked together."

Heidi Mahoney, transportation supervisor, says Batiste's quick action "speaks directly to the validity of training, and to her levelheadedness" required of all school bus drivers.

"We've had medical emergencies before but nothing of this nature," Mahoney says. 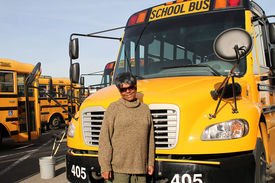 Late January, Clover Park Schools Superintendent Ron Banner recognized Batiste for her actions in a short ceremony with a thank-you coin and letter. Colleagues know Batiste prefers to stay under the radar but they say the kudos are well-deserved.

After the choking incident, the ninth-grader got back on the bus and Batiste took him to his stop where he stepped out and thanked her.

Since the incident, Batiste says she finds herself doing quick visual checks regularly of her front-row passenger.

"I made him pinky swear he would never do that again," she chuckles.

Posted in: WE Are WEA | Member spotlight | ESP | Awards
Back to Blog