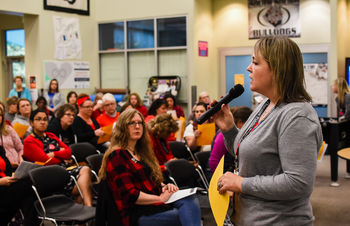 Members of the North Thurston Association of Office and Technical Professionals union have voted to authorize their bargaining team to call a strike.

Union members authorized the strike at a general membership meeting on Oct. 30.

North Thurston office professionals have been in contract negotiations since June. Superintendent Debra Clemens and the school board still refuse to offer pay raises that are competitive with those negotiated by support staff in nearby school districts.

Union Co-President Kristi Ashmore said that based on the district administration’s schedule, the next potential bargaining session isn’t until Nov. 27. Ashmore said the union’s negotiators want negotiations to resume as soon as possible, and she said a strike could be called before that date if no progress is made. Their contract expired Aug. 31.

The local union represents more than 130 office professionals who work in North Thurston schools and the district office. Education support professionals in other districts continue to fight for fair pay raises as well, including WEA ESP members in Tumwater and Olympia. 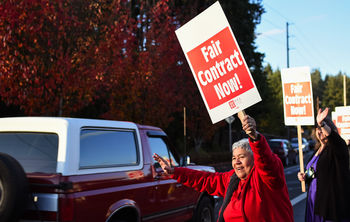 very education support professional deserves fair pay,” said WEA President Kim Mead. “WEA will continue to support our ESP members in their ongoing fight for competitive, professional salaries and the respect they deserve. We won’t back down.”

Ashmore said her members deserve to be paid fairly for the important work they do.

“Our members work hard to make sure all North Thurston students have the support and services they need to be successful,” Ashmore said. “We’re an integral part of our school district. We deserve competitive, professional pay.

“Supt. Clemens and the North Thurston School Board have the money to settle a fair contract now.”

Because of the Supreme Court’s McCleary decision, the district received $1.8 million to increase salaries for office professionals. Yet administrators want to divert 80 percent of that money to other things – their current pay offer to office professionals totals about $350,000.

Nearly 300 community members attended a school district budget forum organized by the union. Many questioned recent budget decisions made by Clemens and the North Thurston School Board, including increases in administrative spending, TV monitors and remodeling Clemens’ office. 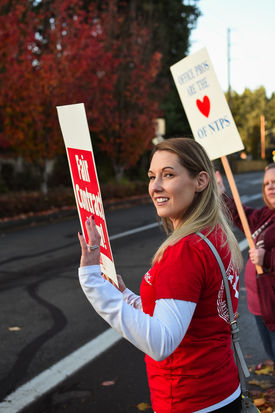 strating to know while we were currently bargaining the district administration thought making huge purchases of TVs for conference rooms was a priority over their staff,” said Christina Smothers, a district employee. “It’s honestly so disheartening.”

Support from other North Thurston union members is strong.

“It’s important to stand with our brothers and sisters,” said Jonathan Levy-Wolins, second-grade teacher at Lacey Elementary School. “It takes all of us to make a school work.

“Without office professionals, teachers are not able to do our job. We all have to work together to provide children a high-quality education.”

Posted in: Bargaining rights | WE Are WEA | Bargaining Updates
Back to Blog