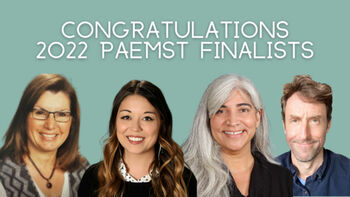 Four WEA math and science teachers have been selected as finalists for the Presidential Award for Excellence in Math and Science Teaching (PAEMST) Award, the state Office of Superintendent of Public Instruction (OSPI) announced May 18. The state-level finalists are:

The finalists were selected by a statewide selection committee comprised of content area experts and award-winning teachers.

After being selected as state-level finalists, the national PAEMST committee will determine national awardees based on content mastery, use of effective instructional methods, effective use of assessments, reflective practice and life-long learning, and leadership in education inside and outside of the classroom.

If any of the finalists are selected as national awardees, they will travel to Washington D.C. to attend a series of recognition events and professional learning experiences, and receive a certificate signed by the President of the United States as well as a $10,000 award from the National Science Foundation.

National awardees are typically announced in the fall.

The PAEMST program was first established by Congress in 1983. The program recognizes exemplary teaching in the science, technology, engineering, and mathematics (STEM) fields. The President may recognize up to 108 educators each year. Since 1983, 81 Washington educators have received the award.

Posted in: Member spotlight | Blog Entries | Awards
Back to Blog