Saving lives in more ways than one 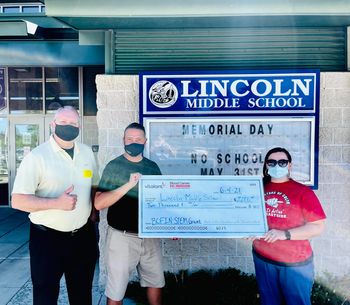 Pullman paraeducators help save lives in and out of classrooms.

One of Yelonda Wilke’s goals as president this year was to find a way to keep her Pullman Paraeducators Association (PPA) local engaged and help her community during the pandemic. Her solution: two blood drives that brought in more than 80 community donations, numerous conversations about the role of paraeducators in schools, a lesson for science classes on why blood donations are important — and a much welcomed $2,000 STEM grant.

“I had thought about doing a blood drive since I knew there was a shortage of blood donations,” Wilke says. “I had done a search to decide which donation service to go with and came across the elementary and middle school STEM grant program that Vitalant has. The info I found was from 2018, but I lucked out as the grant had been extended.”

In March, Wilke went to work on organizing the blood drives. In addition to donating blood, she went to both drives to thank donors, chat people up about the work paraeducators do and why they play such a critical role in the district and for students, whom Wilke prefers to call scholars. Wilke says one of the PPA officers also went to the first drive and did the same.

Since Wilke organized the blood drive, Vitalant awarded the grant to the school district, which then gave the donation to Lincoln Middle School where Wilke works.

The blood drives provided an opportunity for Pullman paraprofessionals to talk to community members and explain and educate people on what they do in schools, Wilke says. The conversations opened doors to ideas on how the community could help support the local’s upcoming bargain, too.

“I talked about equity issues within the district and ways that the PPA was trying to create change in the district to better the outcomes for our scholars,” she says.

Posted in: Blog Entries | ESP
Back to Blog

Nominate an outstanding educator for WEA ESP of the Year