Making it work - teaching kindergarten during a pandemic 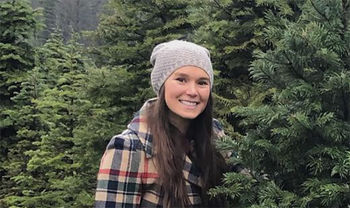 Spraying down playground balls daily had never before been one of her specialties. But after two months of teaching in-person kindergarten during the pandemic, Spokane EA's Lauren Lefebvre has made it part of her teaching practice.

Spokane Public Schools brought kindergarteners back to the classroom in October and Lefebvre was among the first educators to welcome students back. What felt at times like an experiment slowly became a routine, and Lefebvre reports that she and her co-workers at school have found new systems that keep students safe and learning.

"Because they each have to have their own pencils and scissors and glue sticks, they take better care of them," Lefebvre said. "My students are taking responsibility for their things in a way I haven't seen before."

One of the first challenges Lefebvre faced was how to make a class full of kindergarteners properly wash their hands. She solved this by changing how students flow through the room, giving them a squirt of foam soap at the door and having them walk around the perimeter of the room to reach the sink.

"Those extra seconds as they walk are the time they're washing," she said.

She also had concerns about whether her young students would be able to follow the mask mandates. Many educators dread spending time with mask reminders, but Lefebvre found this wasn't a problem. "They're great with their masks," she remarked.

As for learning, Lefebvre is disappointed that her class is a little behind where they would be in a regular year, but considering the transition from remote learning and the extra time in the day it takes to meet safety protocols, they're doing well.

"I'm sad when I think about where other classes of mine have been in December," she noted. "This class isn't there yet."

Eating breakfast, snack and lunch in the classroom and regular hand washing takes time out of students' days. But day by day, the kindergarteners are learning and growing, as safely as possible.

Posted in: Blog Entries
Back to Blog