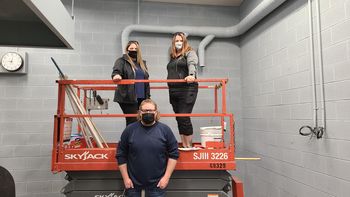 When Washington's school buildings were shuttered about a year ago, due to the pandemic, most of us thought it was short term. Educators were sent home to reconfigure in-person learning to a remote model for what we thought might be a couple of weeks, or a month at the most.

While certificated teachers transitioned their classrooms nearly overnight, many education support professionals  never stopped working at their physical work sites. Just like certificated staff, ESP members regrouped. District administrators made local decisions. Though funding for schools remained the same or grew, some administrators immediately went down the road to furlough ESP members rather than finding ways to use their skills and talents.

Selah ESP President Chris Harris says one of the things his district did, from the very beginning, was to tell ESP members they wanted to keep all employees whole. They were told to find creative ways to make sure everyone had work.

With quick thinking and nimble shifting, some custodians and bus drivers moved to nutrition services to help pack lunches that were put on buses to distribute to students.

As it became apparent that school buildings were not re-opening for students immediately, Harris (who is the head custodian at Selah High School) sat down with others and created a list of projects they wanted to complete.

These were the kind of projects, Harris says, that they always want to get to, but never have time because more urgent work gets in the way.

He heads a paint crew in the summer which includes Harris and three bus drivers. They reconfigured last spring and got to work.

"As soon as we got the go ahead, we painted a ton of stuff, mostly at the high school since that is our oldest building. We repainted locker rooms, a gym, a library, nine portables, the football and softball stadiums and more," Harris says.

"Most of us are good friends outside of work as we've worked together in many capacities," he says. “We put on some country music or a movie on the Jumbotron in the gym and just painted and painted."

At the newer schools, he says, the custodians did some very deep cleaning including scrubbing windows that were very high. He says that the ESP members throughout Selah put a lot of love, sweat, and effort into beautifying grounds, stripping and rewaxing of floors, painting, and more all in preparation for the return of students.

At one point, nearly everyone helped prepare a new kindergarten facility before the youngest students returned to school last fall. Harris says he is proud of his colleagues because, "we really did cram a lot of projects in when the kids weren't here." Harris also praises leaders at the District for their willingness to have genuine conversations about ways to keep employees paid.

Posted in: WE Are WEA | Blog Entries | ESP
Back to Blog

Making it work - teaching kindergarten during a pandemic