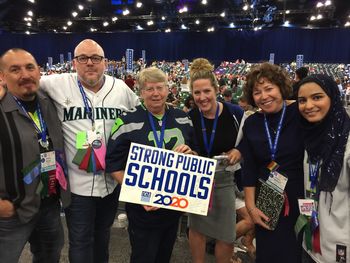 Just this week, in a ceremony honoring the USA’s World Cup victory, team co-captain Megan Rapinoe implored us all to be better, “It’s our responsibility to make this world a better place.”

Here’s a sweet story about how some WEA members made the world a better place for one of our own.

It starts with, Pam Bobiles a teacher from Chiawana High School in Pasco. Pamela has been teaching for 50 years, and was attending her very first NEA Representative Assembly last week in Houston. “I don’t like to fly. I hadn’t been on a plane in 50 years,” she explained.

Like all the delegates, Pam was given a Great Public Schools sign to wave during the RA.  Because it was her first, and possibly last NEA RA, she asked both the outgoing WEA president Kim Mead and the incoming president Larry Delaney if they would sign her banner as a memento of her RA experience.

Unfortunately, after the first day, the sign went missing.  Pam looked around and realized most everyone else still had theirs. She didn’t want to ask Kim and Larry for another round of autographs, but she still wanted a sign. So she asked the guy next to her if she could have his. That guy was Michael Peña.

“You sit next to people for so many days, you get to know them,” said Michael. “I thought it was pretty cool that she’s worked with students for 50 years, and that this was her first NEA RA.” So, Michael offered to get the signatures for her.

After he secured Kim and Larry’s, he brought fellow Mukilteo EA member Sobia Sheikh in on the action. They tracked down other WEA leaders including Stephen Miller and Janie White, the former and new vice presidents. They signed. Sobia and Michael asked many of WEA’s NEA Board Directors who were transitioning out of or into their positions: Pam Kruse, Martha Patterson, Jebb Binns, Shannon McCann, and Shannon Rasmussen, as well as other long-time leaders from WEA including Karen McNamara and Becca Ritchie.

They all signed. And many went over to talk to Pam, shake her hand and thank her for 50 years (and counting) of service to our students.

“At this point, it was kind of cool, and we thought, ‘let’s see how far we can go.’” said Michael. He and Sobia went to the front of the hall, where they got signatures from NEA Executive Director John Stocks, who was serving at his last RA, NEA Secretary Princess Moss, Vice President Becky Pringle, and even President Lily Eskelsen García.

They had the sign laminated to protect the signatures and gave it to Pam as a keepsake of her first NEA RA after 50 years of teaching.

Though it was her first NEA RA, Pam has been to a few WEA Rep Assemblies. “I attend a lot of local rep council meetings, of course,” she said. “It was pretty neat to see how our local work fed into the state RA. Going to NEA RA was like coming full circle.”

Reflecting on the experience, Pam said she was surprised Michael and Sobia went to all that effort. And, she loved the NEA RA. Knowing she may not get to another one, Pam stayed till the very end, watching people leave the hall and talking with the stragglers. When asked what she thought about it after it was all over, she paused and said, “I wish I had gone sooner.”