ABCs of Why We Love Kamala 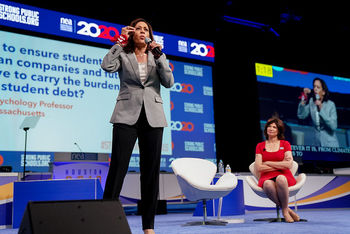 We know Joe Biden will be a tireless advocate for public education.  And now, we have one more thing to get excited about – Vice Presidential candidate Kamala Harris.  Kamala has been a long-time supporter of quality public education and has used her leadership in the Senate to speak out for us and our students and against privatization.   Biden and Harris together are a powerful team who will stand for public education.

Harris is an experienced lawmaker who earned an “A” rating from NEA for her first term in the Senate, where she worked on issues like attracting and maintaining educators in neighborhood schools and for advocating for all students, including students of color, students with disabilities, LGBTQ+ students, low-income students, and others who face barriers to education.

Backer of educators and students

Kamala has stood up for better wages and working conditions for educators.  She supported educators’ 2019 Los Angeles and Oakland strikes for smaller class sizes and adding staff like nurses, librarians, counselors, and other staff supports for students most in need.  She has advocated for an increase of base pay, and eliminating the pay gap to recruit and retain more educators, including educators of color.

Kamala’s first speech as a Senator was to call out the lack of experience and qualifications of Betsy DeVos and she’s been standing against DeVos’ agenda since.  When she was Attorney General of California, she launched an investigation into a for-profit charter school company and found it inflated numbers, used false advertising, and more.  She co-sponsored the Students Before Profits Act to protect students from predatory for-profit colleges, and she advocates for increased K-12 funding, supports racial justice and equity efforts, and works to make college more accessible.

Biden’s naming of Harris as a running mate, the first Black woman Vice Presidential nominee of a major party, further reinforces his commitment to building an administration that cares for our communities and reflects the diversity of our nation.  Already he has promised to fire Betsy DeVos and build a public-education-supporting Department of Education.  We’re looking forward to marking our ballots for Biden-Harris this November!

A chat with the new schools chief