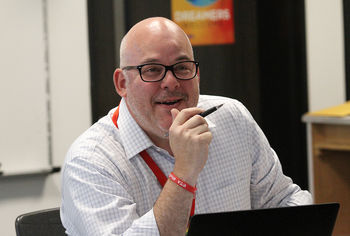 It was election day, last spring, at Arlington High School and Larry Delaney was waiting to hear from his daughter, Maggie. She was running for Associated Student Body (ASB) president and her father was anxious because the text to say she won the election never arrived.

Like most dads, Delaney was preparing comforting words and an ice cream date as he awaited the arrival of a tearful daughter. When she finally came home late that afternoon, she was smiling ear to ear and sharing news of her election success. Before her father could chide her for making her parents wait all day to hear the news, she said, “Pressure’s on, Dad.”

With his election at WEA RA last April, there are now two presidents living in the Delaney household.

“Educators are relationship people,” Delaney says. “As cliché as this sounds, I want to meet and hear what’s important to as many members as possible because we are a member-driven organization.”

After the 2017 RA, the chatter began around who might run for president. Delaney says he wondered about the possibility of a classroom teacher running for president.

“I’m an idea guy but I don’t always chart out an entire plan,” Delaney says. “I was more like, ‘I want to see where this goes,’ so I told my wife, Julie, ‘I think I’m going to run for WEA President. She said, ‘That’s nice. Did you clean the cat box?’”

One of Delaney’s house chores is to make sure their big orange cat, Oliver’s, box is in order. They also have a big Labrador, Toby, so both cat people and dog people can warm up to Delaney. While Julie Delaney took his idea with a grain of salt at the start of his campaign, she began to see that her husband had a knack for building relationships. Once she saw him begin traveling hundreds of miles to bargaining rallies around Washington, she realized his commitment to running was more than a fleeting idea.

Delaney’s current office as Fourth Corner UniServ president is a half-time release. That allowed him to continue teaching math to students who appreciate his relaxed style and easy laugh.

“He likes engaging in real conversation. He really cares about students — even outside of the classroom,” says Joaquin Anaya, a graduating senior heading off to the U.S. Marines.

“I’ve never seen him get angry,” graduating senior Cayden Brost says. “He had my dad when he was in high school.”

Indeed, Delaney has been at Lakewood for 27 years. But he arrived in north Snohomish County accidentally. Spouse Julie, a kindergarten teacher, was hired in the Highline School District where she grew up, right after she and Larry graduated from Central Washington University. After substitute teaching for a year, he applied to schools in the area where they thought he could easily commute from their apartment in Seattle’s Fremont neighborhood. When he was granted an interview at Lakewood HS, he was surprised to find it was north rather than in the Tacoma area. He got the job and vowed to stay, “two years tops.” The couple moved to a townhouse in Mukilteo, gave birth to first daughter, Erin, then ended up moving further north when deciding they needed a home to make room for their second daughter, Maggie. Arlington has been a great place to raise kids, Delaney says.

Delaney grew up, mostly, in Seattle with a short jaunt of his childhood in New Jersey. He is the youngest of eight kids and grew up in a blended family where he was lucky enough to have two sisters named Debbie although one spells her name Debbi. He was good in math and physics and figured he would become an engineer until one day, a teacher told him he really had the personality of a teacher.

“She told me that roads and bridges are good,” Delaney says, “but there are lots of other ways to serve. I’ve tried to have that same talk with a few kids I think have what it takes to teach.”

Delaney says he filled out membership and WEA-PAC forms because that’s what the building rep said to do. He didn’t come from a union family, he says, but one of his building representatives was a math teacher who told Delaney to join the bargaining team.

“He said it was a great way to learn the contract and that everyone should serve on a bargaining team at least once,” so I signed up. “I found that I loved bargaining. I get giddy when we get to bargain. I love a table covered with contract numbers and Starbuck cups.”

Bargaining led to becoming a building rep which led to deciding to give up coaching baseball, which he really loved.  My heart was being pulled more and more by the union and I decided to turn a page and run for Lakewood EA President in 2010, he says.

Delaney says he is excited, if a little bit nervous, about the upcoming challenges as president to more than 98,000 members. With more than two-thirds of our locals considered small and rural, like his, he wants to change the perception that their voices don’t matter. At the same time, he looks forward to learning ways to manage all the different interests including social, cultural and geographic. “I know there are a lot of landmines out there, he says, and I’m not always going to be sure where they are.”

On one of the last days of school, Delaney is working diligently with students to make sure every senior can walk at graduation.

Colleagues and students say Delaney is approachable and compassionate.

"What kind of grade do you want?" he calmly asks one of his students. The student responds and Delaney sets out to show the student how to solve math problems so he can reach his goal. Should you meet Delaney over the next several months, don't be suprised should he ask you what kind of union you want.