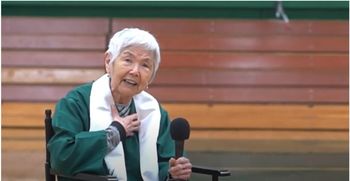 During the 1941-42 school year, 15-year-old Hanna Hayano Semba was in the Mount Vernon High School orchestra, helped with the yearbook and was a "focused student who excelled in science."

That changed on Feb. 19, 1942, when President Franklin Roosevelt signed Executive Order 9066, authorizing the forced removal and incarceration of Japanese Americans after the Japanese attack on Pearl Harbor. Hundreds of thousands of U.S. citizens of Japanese descent, including Semba and her family, were forcibly removed from their homes during World War II into concentration camps.

"All I can remember is that I felt sorry because I had to leave my friends and I didn't know why because I hadn't done anything," Semba said in an interview with a current Mount Vernon High School student.

Semba, the only Japanese American student in her sophomore class, didn't get to graduate with her classmates. She finished high school in the internment camps in which she was forced to live — first at Tule Lake in California and then at the Heart Mountain Relocation Center in Wyoming.

"It was a shock to my life," recounted Semba, who suddenly found herself surrounded by those who looked like her, but because she didn't know how to speak Japanese had no way to communicate with them. "I felt alone much of the time until I got used to being with the other Japanese."

Eventually, the family settled in Minnesota, where Semba, now 95, still lives. She married Thomas Semba, who also was forced into the internment camps, and went on to have four children, all of whom became physicians. 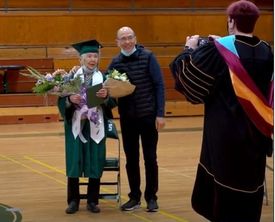 Hanna Semba with son Charles at her graduation ceremony at Mount Vernon High School on May 3, 2021.

When she celebrated her birthday in March, she mentioned to her son Charles that she would like to visit Mount Vernon and Conway again, Charles Semba said. The pair planned a trip for what Hanna Semba thought would be a quick glimpse of her old school.

Instead, the school district took the opportunity on May 3 to "right a wrong," says Vivanco, presenting Hanna Semba during a small, physically-distanced ceremony with the cap, gown and diploma she had missed out on 77 years ago.

Posted in: Blog Entries
Back to Blog

A work of art for healing