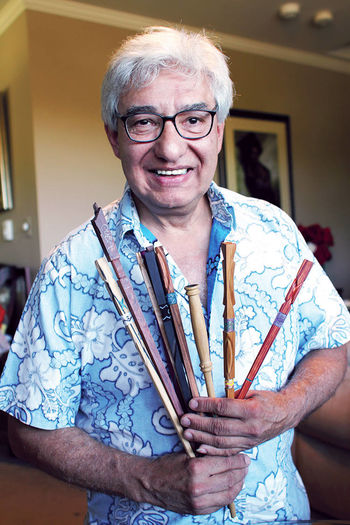 A couple of years ago, Edmonds EA high school teacher Michael Cook told one of his students, an ardent Harry Potter fan, that one day, he'd make her a wand. She told him her favorite color was green.

"I totally forgot about it," Cook says. Last October, when he realized the student would be graduating in June, he started looking for a green piece of wood. Cook settled on lignum vitae, a dark or olive-green wood which means tree of life in Latin (appropriate for Harry Potter fans). Once he found the appropriate wood, he began creating the wand by beading, adding turquoise inlay and trying to dye horsehair several different colors. He added a crystal on the end of the wand, packed it in a box leftover from a Christmas gift from his wife, then wrote a letter on parchment paper which he aged by using coffee and his oven. He named the wand The Green Liberator, signed the letter with his name and the Office of Olivanders then called the student's family.

"We stood socially distanced from her and her family and left the box halfway in between us so we could watch as she opened it," Cook says. "The student was ecstatic to receive it. A week later, she received a financial scholarship for college." Magic wand or coincidence?

That might have been the end of wand making for Cook, but while in the process of creating The Green Liberator, he finished two other wands and thought about what he might do with them. He sent one to a person working hard to take care of her family. He sent another to an occupational and physical therapist who lives in Montana. He created two new wands — for two sisters different as night and day. He named the wands Dusk and Dawn. The wands were made from black and white ebony wood.

Cook found joy in creating wands and sending them both to people he knows and to strangers. One wand went to his nephew who lives in Calgary; another to a critical care nurse in Yakima whom he read about in the newspaper.

"I try to find out something about the person before making the wand," Cook says. "I’ve been playing and working with wood for years. I’m getting better at it."

Cook, who is a Native of Swampy Cree, a division of the Nation of Cree, says his grandmother tried to teach him beading skills when he was younger.

"She was a brilliant teacher and I was a severely lacking student," Cook says. He continued resisting until colleagues got him started when he was working in the Seattle Public Schools. He says he spent a lot of time looking at pictures before he began trying his hand at beading.

Cook is a WEA Board member who was originally encouraged to connect with the union through a friend who asked him to come along to a building rep meeting.

"Tom Pirie said, 'Cook, why don’t you come with me to our union rep meeting in case there’s a time I can't go?' He also told me there was free food, so I joined him. After that, I became a building rep then an Edmonds EA executive board member," Cook says.

He has worked long and hard with several colleagues to build the Edmonds Educators of Color Network. He says he's proud to have helped begin the Educators of Color Conference and has been pleased with how they continue to try and grow the network.

Cook says he really enjoys working through the process of building the right wand for the right person. He has created talking sticks for educator colleagues, too.

"Years ago, a fisherman in Cuba told me to take a scrap piece of wood," he says. "I'll make several wands from that piece of wood, but the first one is for my wife. I'm thankful she let me turn our garage into a wood workshop."


Posted in: Member spotlight | Blog Entries
Back to Blog

NEA's Rep Assembly has a decidedly different look this year

Priorities for return to school