From ‘not smart enough’ to acclaimed teacher: Kanoe Vierra understands students who are told they don’t measure up 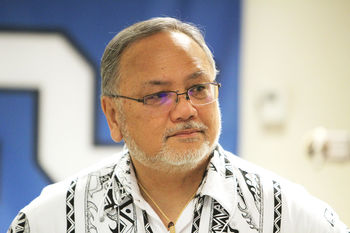 It was just two-words, as the student stepped through his office door and yelled. “Damn you!”

“That’s it,” alternative high school teacher Kanoe Vierra recalls. “All that he said was, ‘Damn you!’ … With an exclamation mark.”

So later that morning, Vierra reached out to the student from his catch-up English class, a class where most students were guys, and asked what he’d done wrong as a teacher.

“He said, ‘You made me read this book. … I hate to tell you this. The chapter you made us read? I was crying throughout the whole chapter.’”

The story, “A Lesson Before Dying,” centers on an older teen falsely convicted of murder. He’d been told throughout his life that he was nothing, insignificant, just a hog. But he came to understand his humanity before his execution — and the falseness of the labels that others may apply.

“‘This is really something I can relate to in my own life,’” Vierra’s student revealed, “‘because I’ve not been treated like other students, those other high-achieving students. … I could relate to what this kid was feeling.’”

For Vierra, an English teacher at Scriber Lake High School in Edmonds, the young man’s realization was a milestone. He not only had understood the literature, he’d gained insight into himself as a person.

Personal connections are core to Vierra, who says as an ethnic Hawaiian that he is driven by two passions: hiring and retaining of educators of color so that our schools’ educators look more like our students, and connecting with his students, many who are students of color, as soon as they enroll at Scriber Lake.

“Kanoe’s approach to teaching and discipline at Scriber Lake is transformative,” says Edmonds EA President Andi Nofziger-Meadows. “Kanoe has been using restorative justice and restorative discipline practices for most of his career; they are the foundation of his interactions with students both as a teacher and as Dean of Students.”

That doesn’t mean ignoring discipline. It means seeking solutions besides suspension. Some of his beliefs, he says, are rooted in traditional Hawaiian culture, Hoʻoponopono, to make things right, to restore relationships that have gone bad, to help individuals understand and internalize how their actions impact the larger group.

Vierra also serves as a WEA trainer for Culturally Responsive Classroom Strategies. He helps bring community members to Scriber Lake as mentors for students in the Men of Valor/Women of Wisdom mini-course. Kanoe serves as one of the seven board members on the Teachers of Color Foundation, a community group established to provide scholarships and other assistance to paraeducators of color in Edmonds as they pursue a teaching certificate. He participates in the Edmonds Educators of Color Network.

And, Nofziger-Meadows notes, he has been a gentle but strong voice for identifying and disrupting institutional racism in their district, using Edmonds EA as the springboard for this work. He has served as a building rep., and was elected as the Educator of Color Representative to EEA’s Executive Board. He was a founding member and leader of the Edmonds Educators of Color Network.

Those are among the reasons that Vierra is this year’s WEA state nominee for the NEA Foundation Award for Teaching Excellence, a recognition that parallels our state’s Teacher of the Year for all around educational excellence. The Foundation will select a national winner in the coming months.

It’s easy to tick off a long list of the cultural, educational and demographic descriptors that place Scriber Lake’s students “at-risk.”

A crucial antidote is relationship. Vierra strives to connect with each new student entering Scriber Lake so, at a minimum, they feel comfortable talking with him, understand his discipline philosophies, and will engage in ongoing conversations after their entry class has ended. Home rooms are known as families, and students in the class do come together for activities as a family might. The goal: to build a community so that students feel like they really do belong. That means students have someone who may not agree with them, but more than likely will go to battle and have their back. People who care for each other, even if they disagree. Just as a family would.

“We do things a little bit differently,” Vierra says.

The approach is bringing positive change. Graduation is a key yardstick for measuring success for students who come to the school moderately to severely behind in the credits required to graduate, and graduation rates are improving. Scriber Lake combines daytime classes at school on top of online courses at home so that students can catch up, and either graduate on time or be close to graduation so that they can finish the following year.

Vierra’s own journey into teaching was nearly smothered by teachers who told him he would never reach his dream, a dream he’d had since fifth grade, because he simply wasn’t smart enough. He didn’t know not to believe them. Then a high school English teacher said she disagreed. She pulled him aside to show him his grade, and it was the highest in the class.

Many of his students today arrive at the alternative school already labeled as troublemakers. Vierra takes a different tack. He asks, “What is your dream?”

It’ll take hard work, he cautions. Some students will forge ahead. Some will founder. Some will ultimately get back on track.

“Don’t let anyone tell you can’t obtain your dreams,” the now-acclaimed teacher says, “because you can.”

Posted in: WE Are WEA | Member spotlight | Blog Entries | Awards
Back to Blog

I'm just trying to do the best I can