How some WEA members won strong gains this year 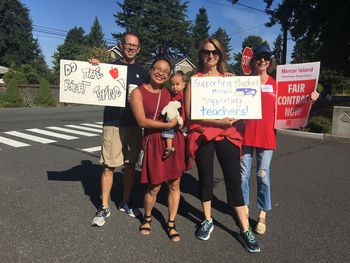 WEA members in dozens of locals won significant pay raises this year – in some cases, the largest they’ve ever negotiated.

Nearly all WEA members got at least the 2.3 percent cost-of-living adjustment mandated by the voter-approved COLA law WEA helped pass more than a decade ago. Around 175 of WEA’s 375 local unions had open contracts this year, and some were re-opened, which paved the way for hefty locally negotiated pay raises.

Many WEA locals exceeded the statewide goal of COLA plus at least 5 percent.

It wasn’t necessarily easy – in many cases, administrators were reluctant to settle. Well-organized WEA members pushed back, often enlisting the support of parents and other community members. Mercer Island Education Association members organized hundreds of supporters at a school board meeting in August – and negotiated a tentative agreement within 24 hours. Mercer Island education support professionals won an increase in base pay of more than 15 percent (including COLA), while their certificated colleagues received up to 12.6 percent more this year.

And it wasn’t just Puget Sound-area educators who negotiated substantial pay raises. For example, Touchet ESP members won a pay raise of 10 percent plus the COLA.

Although state funding for educator salaries is rising, under new state law, pay raises will be temporarily capped next year. That made this year’s pay increases even more important. (After next year, changes in state law and school funding are expected to give locals more latitude to meet local needs through collective bargaining.)

WEA members in two small locals went on strike. In both cases, the strikes were about standing up to disrespectful and abusive administrations that refused to offer fair settlements. The 55 teachers in the San Juan Island School District went on strike the Friday before Labor Day weekend and reached a settlement on Labor Day.

A similar number of classified support staff at Bellingham Technical College struck in late September after starting school with an expired contract. Faculty, also WEA members, honored the picket lines and classes were canceled during the four-day strike. Immediately after ratifying a new contract, Bellingham Educational Support Team members voted NO CONFIDENCE in the college president and two top administrators.

“The toxic campus environment is detrimental to the mission of our college and harmful to our students. It is untenable to continue on this path. The current BTC leadership must either dramatically reform or, if unwilling to do so, top BTC administrators must be replaced by more progressive and forward-thinking leaders,” the motion read.

This story was originally published in the WEA member magazine WE 2.0. Read the full issue here.